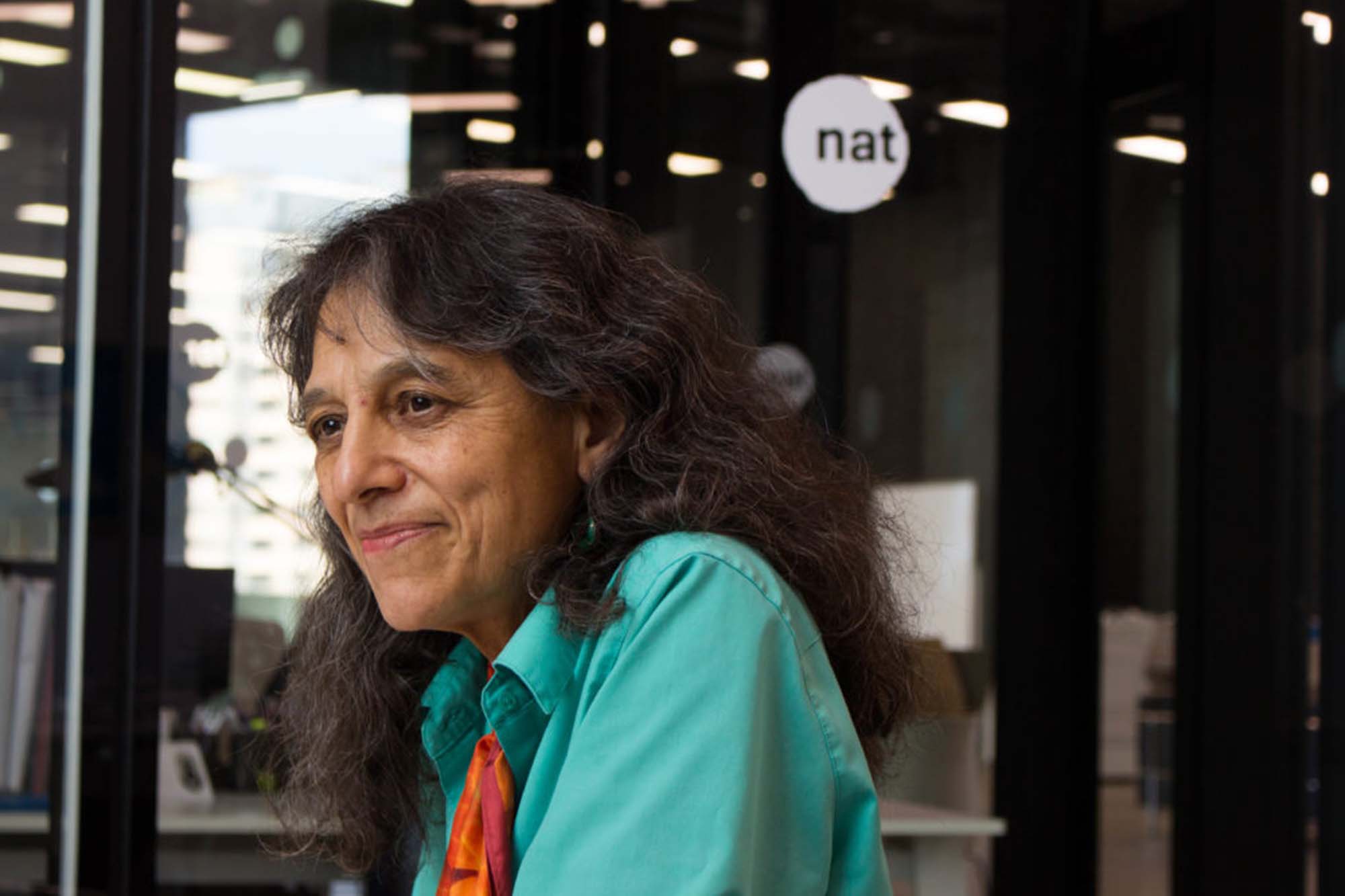 In October 2021, SBS’s Nalini Nadkarni, Professor Emerita, came to Barcelona to collect the NAT prize, which is awarded by the Museum of Natural Sciences to personalities who have excelled in disseminating scientific knowledge.

Known as the “Queen of the Forest Dosser,” Nalini Nadkarni is a pioneer in the study of the ecosystem that develops in the treetops of tropical forests, which she explores with mountain climbing techniques. This environmental activist is a passionate communicator who raises awareness about nature conservation by creating collaborations with sectors of society far removed from academia: prisons, religious groups, artists, rap singers and companies.

How does the world look from the top of a tree?

When you climb to the top of a tree, you see so far that it gives you a new perspective: the forest becomes three-dimensional, it gains in depth, the light changes as you climb. Just as the first divers who dived into the sea in a diving suit discovered a whole new world that could not be seen from the surface, the same thing happens with forests: forest ecologists have understood much better the forest from the canopy of the trees.

Have you ever talked to a tree?

No (laughs), but don’t think about it. As a child I was already fascinated by trees and I invented a microphone that I wanted to place inside the bark to see if they made any noise. When I grew up I realized that scientists already communicate with the objects of nature through experiments and the answers we get from our observations. I don’t even talk about it, but we do communicate with them.

What can we learn from trees?

Lots of things. First, they live much longer than us and give us a sense of time that is much more dilated than the strictly human. When you plant a seed from a tree and wait for it to grow, you have to expand the sense of time. Trees have taught me to be patient.

We are too used to getting immediate results.

Yes, I myself am a very nervous person, I like to do things fast. Being in the presence of trees helps you adjust to their time units, and you have to slow down if you want to capture their processes.

And what can these Costa Rican forests that you explore at this time of climate crisis teach us?

Forests teach us how to act in the face of environmental disturbances. Just as animals or humans can migrate elsewhere in the event of a drought, trees cannot move from where they are, but they do develop other mechanisms to get out of it. It is an important lesson for us humans, that in the face of the challenges of climate change, we realize that we only have this planet, and a trip to Mars does not solve the problems of now and here to fight the factors that reduce the our biodiversity.

In your NAT award acceptance speech, you stated that trees move. You even calculated their movement.

Talking about tree movement may seem like a beast, a useless exercise, but it’s all a matter of perspective. There are people who think trees are boring or stupid. 90% of National Geographic’s reports are devoted to animals, and perhaps it’s because we think trees don’t move in such an interesting way as beasts, just because they don’t talk or communicate like animals. But I wanted to show that if you look at the tree from another perspective, not from the base of the motionless trunk nailed to the ground, but from the canopy, you can observe how the leaves of the trees move in multiple directions.

I tied small brushes to the tips of the leaves and let the swing of the leaves leave on a paper the lines of this movement in a period of two minutes. If a line is 10 cm long and I know how long it has taken to make it, and I can count the leaves and branches of a tree, I can also come to calculate that a tree, adding up all the movements of its leaves, would traverse the amount of 186,540 miles per year.

No animal can run so much!

Of course, all this is a metaphor, I would like to encourage all those people who feel powerless in the face of ecological disaster, to think that any small move adds up, that if we add the swing of the leaves we come to the conclusion that a tree can do seven times around the world in a year. It is about finding hope in small efforts that add up.

You see not only trees as biological beings but also in their cultural dimension.

As humans we tend to specialize. I have studied the ecology of forests, but beyond their purely biological dimension, I wanted to find those values that link trees to spirituality, aesthetics or social justice. If we look at the role of trees in different religions, we will see that they have always been seen as positive and vital elements, from the Tree of Life to the Bible (in the Old Testament alone there are more than 300 different trees!) to the tree under which Buddha is enlightened.

What can trees bring to our religious life?

Some time ago we began to study the trees in the church gardens, and we made brochures for parishioners so that they could understand the scientific nature and at the same time the religious meaning of the trees. So those trees that came out in the Bible and that they had next to the church took on a new meaning for them. I wanted to interweave the cultural dimension with the natural one of the trees, like the threads of a tapestry. That is, to integrate these different threads of understanding that the humanities and sciences provide us separately.

And going from one church to another, as many denominations as there are, as he has avoided disputes between creationists and evolutionists….

Approaching a religious community as a scientist requires a certain intellectual humility. I wanted to avoid this dispute, because a creationist will not change his mind with scientific arguments. If they already believe in the Bible or its sacred books as a source of authority, why not start from here and learn how trees and forests are described in their scriptures? Whoever wrote the Bible understood that trees were important to people and to those who read the scriptures. In the middle of the biblical desert, the trees help you not to get lost, they are points of orientation, which can represent God himself. It was about understanding the value of trees, so there was no conflict.

You are the daughter of a Hindu father and an Orthodox Jewish mother. So you lived with two different religions from an early age.

My parents raised us so that there would be no conflict between the two traditions. At home we all celebrated and ate bagels with curry! Both father and mother lived their respective religions strictly, but love made them overcome any difference. In essence all religions are equal. It is true that Judaism does not admit any image of God and Hinduism in vain full, but in essence they are perfectly shareable spiritualities.

And do you believe in God?

I am agnostic or even directly atheist. I see the sacred in nature, when I climb a tree I feel a connection with nature, with others and with myself. My experience of spirituality goes through here.

In American prisons there are many inmates who convert to Islam. The Qur’an says that if Muhammad does not go to the mountain, the mountain goes to Muhammad. You have made the forests go to the prisons.

There are 2 million inmates in the United States, 50,000 of whom are young. They live in an environment devoid of vegetation, between concrete walls, without any contact with nature, because in prisons the trees would deprive the guards of visibility. Prisoners also do not have access to education and are the ones who need it most. And I thought I was a scientist and I have a lot of colleagues willing to share their knowledge. We invited inmates to raise endangered species and plants, such as the Oregon spotted frog or the American Kestrel. Right now we’ve got sixty U.S. prisons doing conservation work, with inmates motivated to do something that goes beyond themselves, happy to contribute to the preservation of the planet.

And what impact has it had on their well-being?

We did a test with inmates who are in solitary confinement. We introduced a few of them to a cell in the cell where we projected images of forests and natural spaces. After a while we found that these inmates then behaved less aggressively. Also important is the impact that the experience has had on the academics who have participated in the project: they have left their small research circle, they have become aware of a reality that has made them more socially engaged and they have been involved in civil rights and in the struggle of movements like Black Lives Matter.

You haven’t had enough of that. From the International Canopy Network you have linked the values of ecology with sectors such as fashion. You even invented a Barbie that climbs trees…

Yes, in 2004 I designed the Treetop Barbie and proposed to the company Mattel that they make it. They rejected the proposal but fifteen years later they created it and put it up for sale.

Did you want to encourage girls to pursue a scientific career?

Women can bring another look at science. The case of Lynn Margulis has been key in evolutionary biology.

Absolutely. Many scientists, especially men, have believed that what has pushed the evolution of species has been competition, but Margulis showed us that symbiosis has also been key from the moment when the complementarity between giving and receiving it makes us see that there are no winners or losers but that things change and are transformed thanks to cooperation.

This interview originally appeared in Catalan in the digital publication Nuvol here.

You can read more about Nalini Nadkarni, her outreach, science communication efforts and research at StemCap here, at the STEM ambassador website here and at Nadkarni’s personal website here.

Ecological and conservation research in the School of Biological Sciences is supported through student scholarship donations.
You can make a difference by making a gift today here.