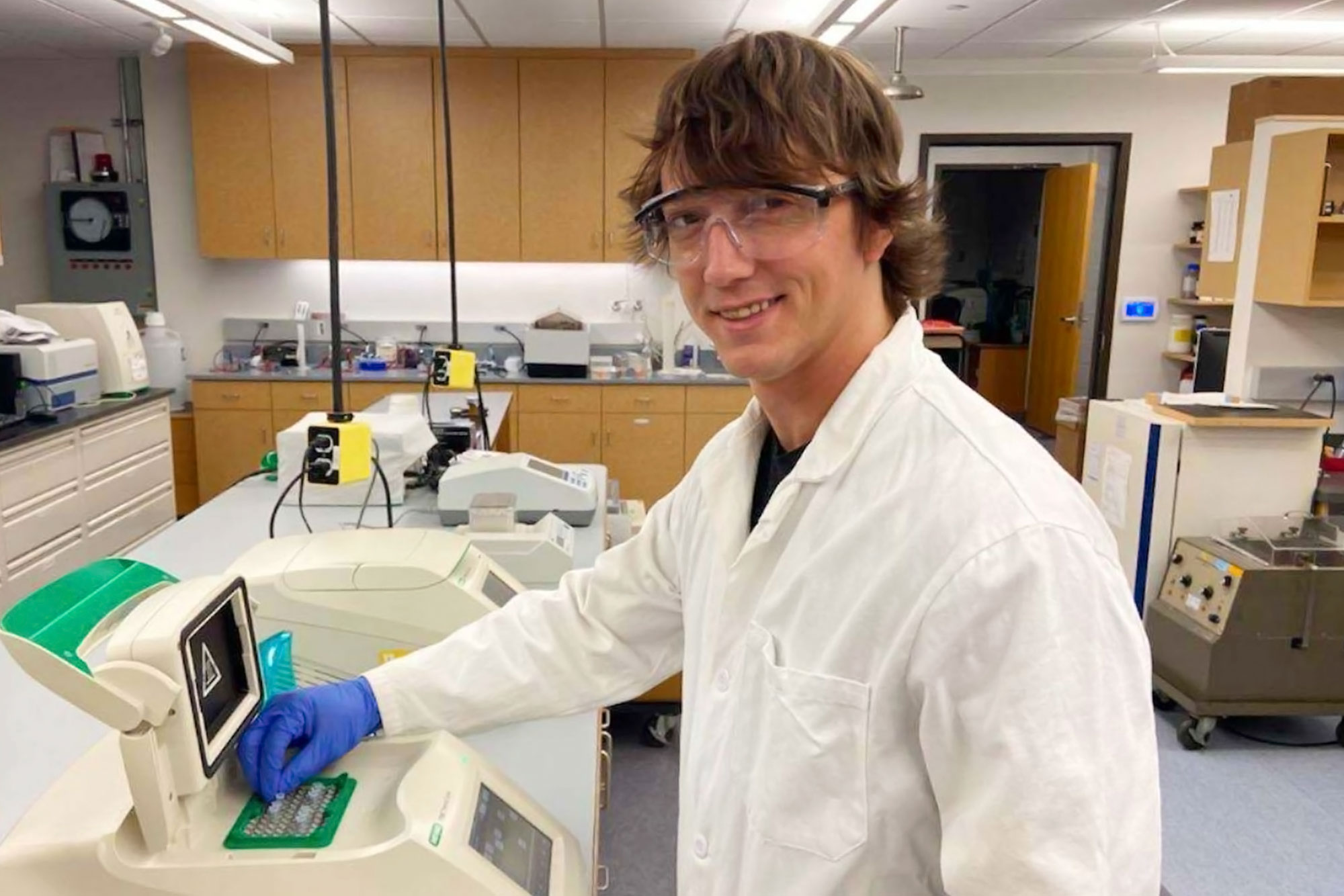 It’s a gateway to some of the most remote (and still yet-to-be-permanently settled) land) in the Beehive State. But for Carl “Ty” Mellor, it’s been an ideal launching pad for a career in, of all things, microbial engineering. The double-major in chemical engineering and cellular & molecular biology places Mellor on the edge of a different frontier than that of the magnificent badlands of brightly colored and wildly eroded sandstone formations, populated by wild horses and etched drawings from the ancestors of today’s Native Americans.

Frontiers, after all, can be both big … and small. The deep canyons and giant plates of stone tilted upright in his hometown’s backyard are metaphors for the scientific reveals that await the young scientist who, inversely, investigates the micro universe rather than macro one of massive geologic upheavals where he spent time as a youth camping and hiking with friends.

“In physics,” says Mellor of his time at the University of Utah, “we were going over things that happen at the micro scale which got me interested. It’s all so  complex and there’s so much left to discover on how things work at that scale, and there is so much potential for solutions to real world issues.”

Considered a “non-traditional” student, the twenty-eight-year-old U senior graduated more than a decade ago from North Sevier High School in a class of 46. During that time he worked as a dishwasher, then at Little Caesar’s pizzeria with one winter at Brian Head Ski Resort, followed in his final year at an oil change/tire repair shop. Today, he is the recipient of no fewer than seven university scholarships and awards, including the Joseph T. Crockett and the Neil R. Mitchell Endowed Scholarships.

From Salina to the bench at one of America’s top research institutions might seem like a leap as far and precipitous as relatively nearby “Swasey’s Leap.” Local legend has it that Sid Swasey bet his brother Charlie that he could jump his horse over the 14-foot wide, 60-foot deep gap which Charlie proceeded to do. But for Mellor, his was a leap clearly worth making. Now embedded in the Kelly Hughes Lab at the School of Biological Sciences, he is busy co-opting the type 3 secretion system used to build flagella in salmonella to secrete proteins of interest and simplify bacterial protein synthesis.

When asked to explain something most people don’t known about salmonella, he explains that the pathogenic bacteria is named after Daniel Salmon, the first person in the U.S. to receive a Doctorate of Veterinary Medicine. But, despite his adoration of a pet chihuahua named “Ace,” he won’t be going to veterinary school.

“I think there is a ton of potential [for research] in aging and disease,” he says.  “There is so much that we don’t understand yet about the human body. There is also potential in carbon sequestration, either by manufacturing long-term products using carbon or developing microbial carbon sinks that can sink to the bottom of the ocean for example. Possibly being able to manufacture stronger and lighter materials by mimicking the way certain enzymes have incredibly low error rates.”

The last few years have not been easy for Mellor due to the pandemic. But, perhaps surprisingly, he will tell you that he didn’t mind online classes that much. “I was working grave shifts at the time [at the University of Utah Guest House] and was able to watch all of my lectures during downtime at work. Transitioning back to normal life has been much more difficult.”

Difficult or not, in October Mellor jumped right in to share his research poster titled “One Step Protein Purification via the Type 3 Secretion System” at the annual SBS Science Retreat. His explanations to the curious as well as potentially the friendly (and admittedly rare) combatant-questioner, was clear, commanding and informed. Poster presentations of this kind are a sort of pay day for an undergraduate: it’s that rare moment when all the hours “at the bench,” under the ‘scope, and under the care of a principal investigator and mentor converge, and one’s scientific findings are distilled into appealing, bite-sized pieces.

As Mellor approaches graduation and graduate studies, he has some advice for his undergraduate cohort: “Keep in touch with old friends and put an effort into connecting to new groups (especially for tough classes). Get lots of fresh air and sunshine, spend some time learning time management, and remember the online skills you had to learn since they’ll always be useful.”

He and his older brother Casey, whom Mellor refers to as his “hero,” still hang out together. “Scientifically, he’s the only one among my family and close friends that I can talk to about research or science in general. Everyone else’s eyes tend to glaze over almost immediately, while he’ll actively argue, ask questions, and come up with his own solutions. We share reading recommendations and talk about any new stuff that pops up in the news… He’s always been there for me.”

You can take the boy out of Salina but you can’t take the Salina out of the man. And Ty Mellor wouldn’t have it any other way.

Ty Mellor’s research  has been funded in part by a scholarship from the Mountaineer Endowment for Undergraduate Research. You can donate to our undergraduate scholarships at SBS here.