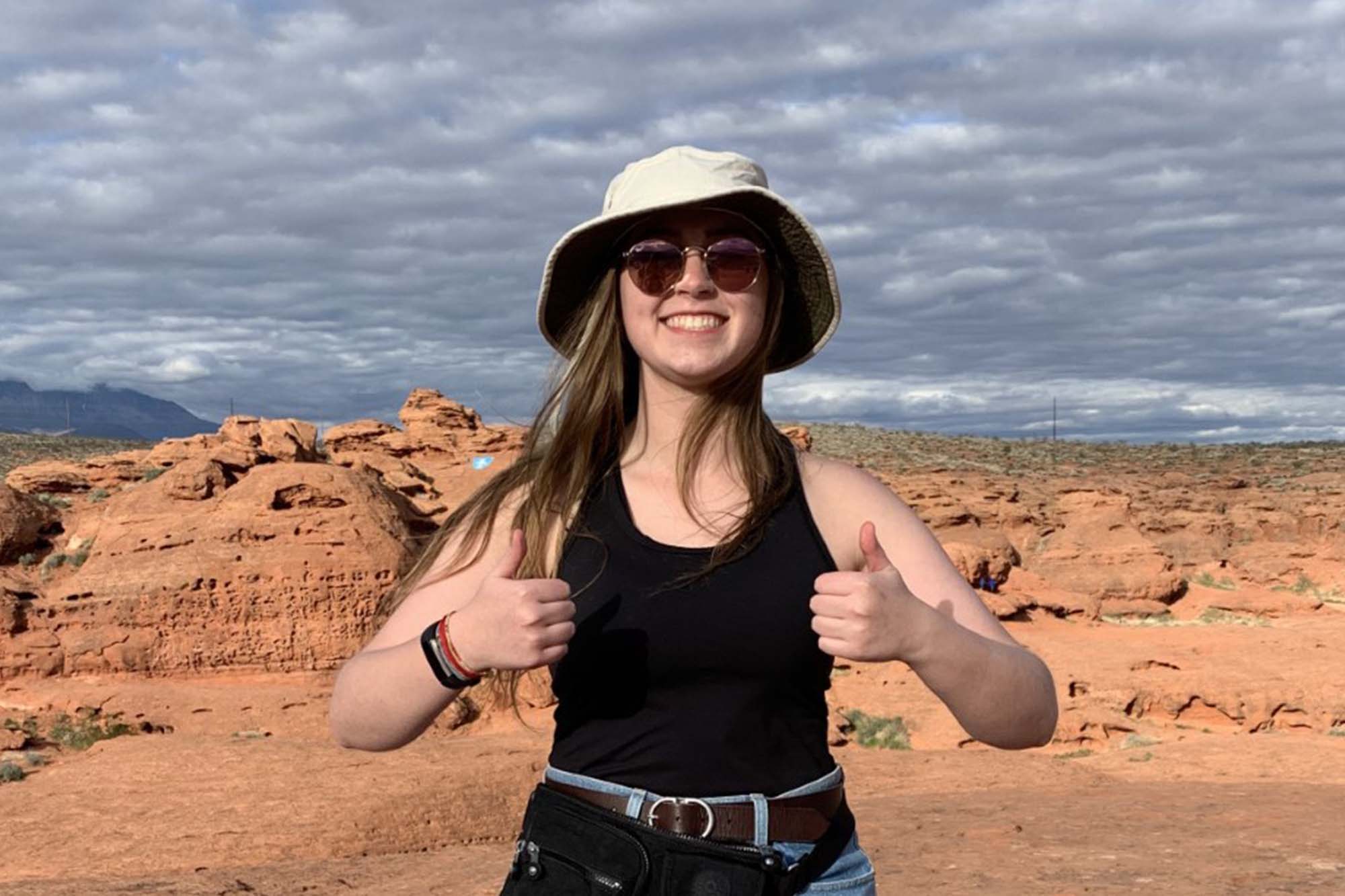 “Many people who [do] not have previous experience with plant biology,” says Haylee Mathews, “don’t realize that plants have hormones and utilize hormone signaling to communicate environmental conditions to the different structures of the plant.

They need a way to regulate growth in response to the environmental conditions they’re experiencing.”

The Illinois native, now a senior majoring in biology, knew all along that she was interested in genetics and genomics but had a difficult time finding a lab that was accepting undergraduate researchers during COVID.  “[H]owever,” she explains, “Dr. [Leslie] Sieburth gave me the wonderful opportunity of working in her lab. There were two research projects going on in the lab at the time involving genetics… . I ended up helping with one of those projects and taking over the other one.”

Using Arabadopisis thaliana as the model organism, Mathews’ has been tasked with identifying genes involved in a hormone signaling pathway. Her work culminated in a poster presentation at the School of Biological Science’s annual Science Retreat & Lark Lecture event in October.

The invitation to appear with 15 others, including four graduate students, underscores the rigor of SBS’s undergraduate program. Biology majors and others beginning with freshmen in the College of Science’s Science Research Initiative are in the lab or in the field (or both) doing research often their first semester as freshmen. Distilling the results of months and sometimes years of experiments and then interpreting and presenting them to a room of colleagues and esteemed professors/principal investigators is no small feat. Experience in clearly communicating one’s findings–in Mathews’ case funded in part by the Mountaineer Endowment for Undergraduate Research–is part of the educational process.

And Mathews is keen on that aspect. Her poster titled “Dalekin Signaling: Genetic Analysis of Suppressors” shows how she uses cold-sensitive mutation suppressors as well as an ENU-generated mutation suppressor to determine where in the pathway a gene is involved and what that gene encodes. A gene pathway can be either of the hormone biosynthesis variety or hormone response kind. One example of what the gene encodes in this scenario is an enzyme involved in biosynthesis or a receptor involved in response.

That may sound clear as mud here which is why a poster flanked by the researcher with vivid illustrations and procedural maps is in order. At the Retreat, questions from enquiring minds already informed by the scientific method in general and the study of life in particular were readily answered by Mathews in concise answers and elaborations. It’s clear that she knows of what she speaks, and of what she has experienced in the Sieburth lab and, while agricultural implications of this research are still proprietary, the knowledge-base continues to accumulate. That this undergraduate was able to participate on the level she did is an accomplishment.

Outside of the lab, Mathews will be working as a teaching assistant for a second semester for an honors class titled “Radical Quiet,” a mindfulness meditation course. She also enjoys art and when she travels always attempts to make it a priority to visit a new art museum. In Salt Lake City she attends live music events and has been recently getting out to support local bands. “It’s a great way to relax and also support the community so future generations also have the opportunity to experience a lively local music scene.”

As she prepares to graduate this spring, and to find her way into graduate studies in genetic counseling, Mathews is continually inspired by her “hero” Rosalind Franklin (1920 to 1958),  the British chemist and X-ray crystallographer whose work was central to the understanding of the molecular structures of deoxyribonucleic acid (DNA) and ribonucleic acid (RNA), viruses and, in the physical sciences, coal, and graphite. Of course, things have fortunately changed since Franklin navigated the overt sexism and suspicion of an almost entirely-male King’s College in the early 50s. (That the chemist was never nominated for a Nobel Prize for her work still irks some.)

Perhaps it is also from her hero that she fashions her advice to up-and-coming graduates at the School of Biological Sciences:  “Be persistent!,” Haylee Mathews says. “[M]any students struggle to find opportunities that align with their specific interests. Don’t be afraid to push yourself outside of your comfort zone and area of interest. You might become completely enamored by a topic or model organism you previously had no knowledge of/experience with.”

The Mountaineer Endowed Scholarship is one of many funds to which you can donate to support undergraduate research at SBS. Click here for a list.