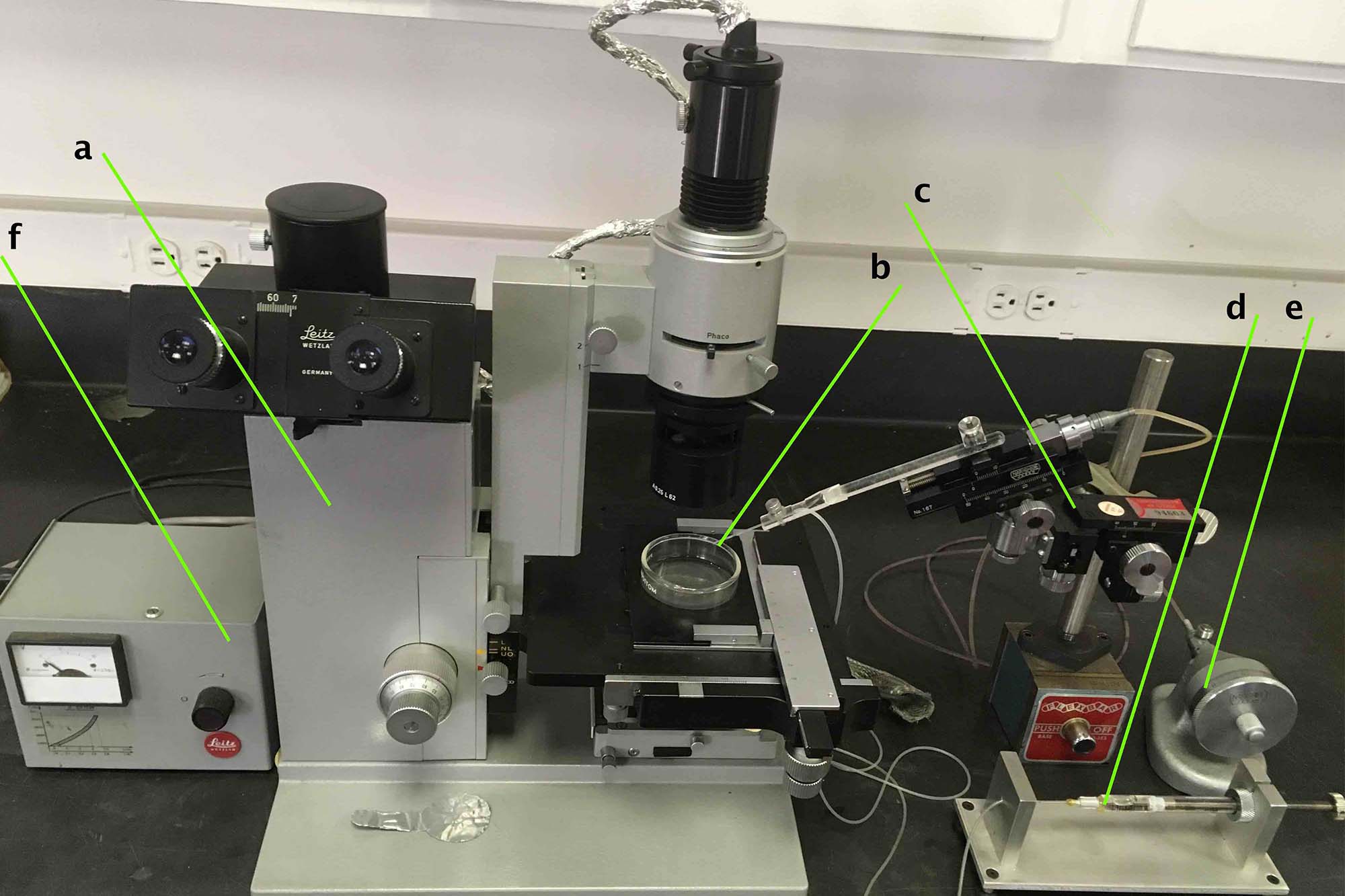 Each year thousands of professors, members of national committees, Nobel laureates, and parliamentary assemblies lobby their candidates to the Nobel committee for the Nobel Prize. The results of this year’s selection were announced on Oct. 8 by The Norwegian Nobel Committee for research that the committee describes as “having conferred the greatest benefit on mankind.”

Distinguished Professor of the School of Biological Sciences, Mario Capecchi who is also professor in the Department of Human Genetics and adjunct professor in the Department of Oncological Sciences at the University of Utah, is familiar with the process of winning a Nobel Prize. In 2007, Cappechi won the Nobel Prize in Physiology or Medicine for discovering a method to create “knockout mice,” which are mice with a specific gene turned off.

This technology, developed by Capecchi and collaborators, helped usher in a new era in biology where genes could be turned off and on in order to see the effects on the mice. Today, this technology is used in labs all over the world to investigate genomics, mechanisms for cancer and the very foundations of human development.

Winning the Nobel prize is one of the highest accolades in science.

“It’s a recognition of what you’ve accomplished,” Dr. Capecchi explained, “and it is very pleasing to win. In my case, the concept [for knockout mice] was long going; it took over 10 years to get there. We knew that we could win the Nobel prize with it. When we submitted these experiments to the NIH (National Institute of Health), they thought they were impossible and, therefore, we didn’t get any money. But, we knew that if we succeeded, we would have an impact because you could do the things that you never imagined before. By looking at the effects of changing a piece of DNA over and over again, all in different places, you can start to see what a gene is doing and what it is they are required for.”

Like many winners of the Nobel Prize, Capecchi was both one of the first and last people to find out.

“The Nobel committee called me at 3 o’clock in the morning,” Capecchi said. “And my wife was the first to pick up the

phone. It was a person with a foreign accent that she couldn’t quite understand, so she hung up. Luckily, this person was persistent and called back. So, I listened for a while and figured out what was going on. And then, about half an hour later, there were about 30 press people at the door.”

Capecchi described winning as “Incredible. It’s always a surprise because you don’t know what’s happening. You can imagine that the dynamics of 50 people hearing about it at the same time; it’s unpredictable.”

This year, the Nobel Prize in Physiology or Medicine was awarded jointly to David Julius, at the University of California, San Francisco, and Ardem Patapoutian, at Scripps Research in La Jolla, California, for their discoveries of receptors for temperature and touch.

“Their research gives us a clue as to the things that any organism can do: sense their environment,” Capecchi said. “In this particular case, these researchers discovered that when you push on a cell, the cell can sense that you are pushing on it. They discovered ways in which the sense of touch works, which is important when a cell judges its environment by feeling and sensing, and their findings on the mechanical receptors responsible for this is why they won the Nobel prize.”

Erhu Cao, an assistant professor of biochemistry at the U and an expert on sensing receptors, was proud to see his field awarded the 2021 Nobel Prize in Physiology or Medicine.

“[I’m] glad that David Julius and Ardem Patapoutian were jointly awarded the Nobel prize for their contribution to sensory biology,” said Cao in an email interview. “The general public should also be excited about their discoveries because we all interact with our environment via complex sensory systems and sensation of temperature, pain, and touch is our daily experience.”

Cao also broke down the significance of the research that was awarded the 2021 Nobel Prize.

According to Cao, the findings of Julius and Patapoutian are significant in understanding the fundamentals of how life perceives the world around it.

“The discovery of the protein molecules that detect these signals lay the foundation to study their structures and their modulation by pharmacological agents,” Cao said. “The ability to sense temperature, pain-producing stimuli and mechanical force is fundamental to all living organisms. It can be argued that the sense of temperature, pain, and touch is as important as vision, smell, and taste.”

By Nathan Levinzon
This article originally appeared in The Utah Chronicle, November 17, 2021 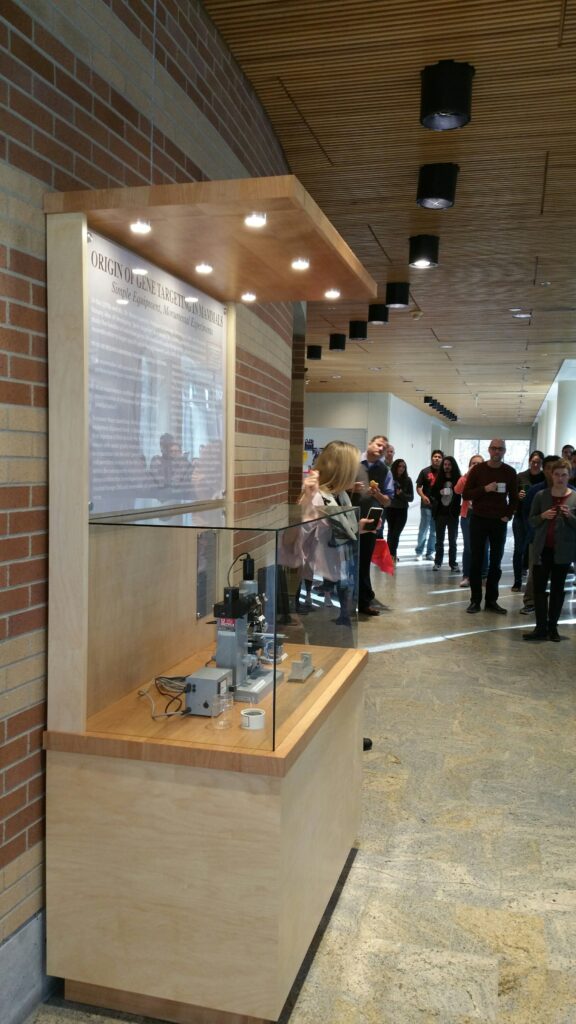 In the 1970s & 80s, Dr. Mario Capecchi, Professor of Biology at the U of U, had the revolutionary idea to use gene targeting as a means to create genetically modified mammals to understand the function of individual genes and develop gene-based therapies. He envisioned leveraging homologous recombination – a natural process in which genetic information is exchanged between strands of DNA with similar sequences- to target specific genes for replacement with DNA modified in the laboratory. To do so required answering two critical questions:

To answer these questions, Dr. Capecchi with the help of his colleague, SBS Professor Emeritus Dr. Larry Okun, pieced together an apparatus from standard laboratory equipment, scavenged from colleagues in the Biology Department. An early prototype even included a wooden popsicle stick as a critical component, which was eventually replaced by a custom-crafted metal part. The equipment displayed in the case below allowed Mario to inject DNA directly into the nucleus of an individual cell and to follow the fate of the injected DNA as the cell continued to grow and multiply.

The results of the experiments conducted with this apparatus convinced Mario and the world that it would be possible to modify genes at will in mammals. These observations underpinned subsequent experiments in the Capecchi laboratory that led to the generation of the first genetically modified mice, resulting in the Nobel Prize in Physiology or Medicine awarded in 2007 to Drs Mario Capecchi, Oliver Smithies and Martin Evans. Dr. Capecchi’s pioneering work was conducted here on the University of Utah campus in the South Biology Building in the Department of Biology.

1. A generally available ‘inverted’ microscope (a) permitting cells in a culture dish to be observed through the dish’s bottom, leaving the area above the dish accessible to a micropipette (b) for injections. The micropipettes are prepared with a small lab device that heats thin glass capillary tubing about 1mm in diameter and pulls it to yield tips on the order of 0.5 – 1 micron in diameter, around 1/100th the thickness of a human hair. 2. A micromanipulator (c) holding the micropipette and custom modified from a commercial model to allow both movement of the micropipette from cell to cell in the horizontal (X-Y) plane of the culture dish, but above the cells, and a hydraulically controlled “axial” micro-drive positioned at a convenient angle, allowing the pipette to be carefully driven into the nucleus of a selected cell, and connected to the manual driving control (e) by a very flexible oil-filled “hydraulic” line. 3. A screw-driven injection syringe (d), mounted on a simple holder and connected to the micropipette by very flexible fluid-filled tubing. 4. A control for microscope-lamp brightness (f), connected to the lamp by a flexible cable.

You can read about the history of the Narishige Micromanipulator used in Mario Capecchi’s seminal DNA-microinjection experiments and present in the display here.