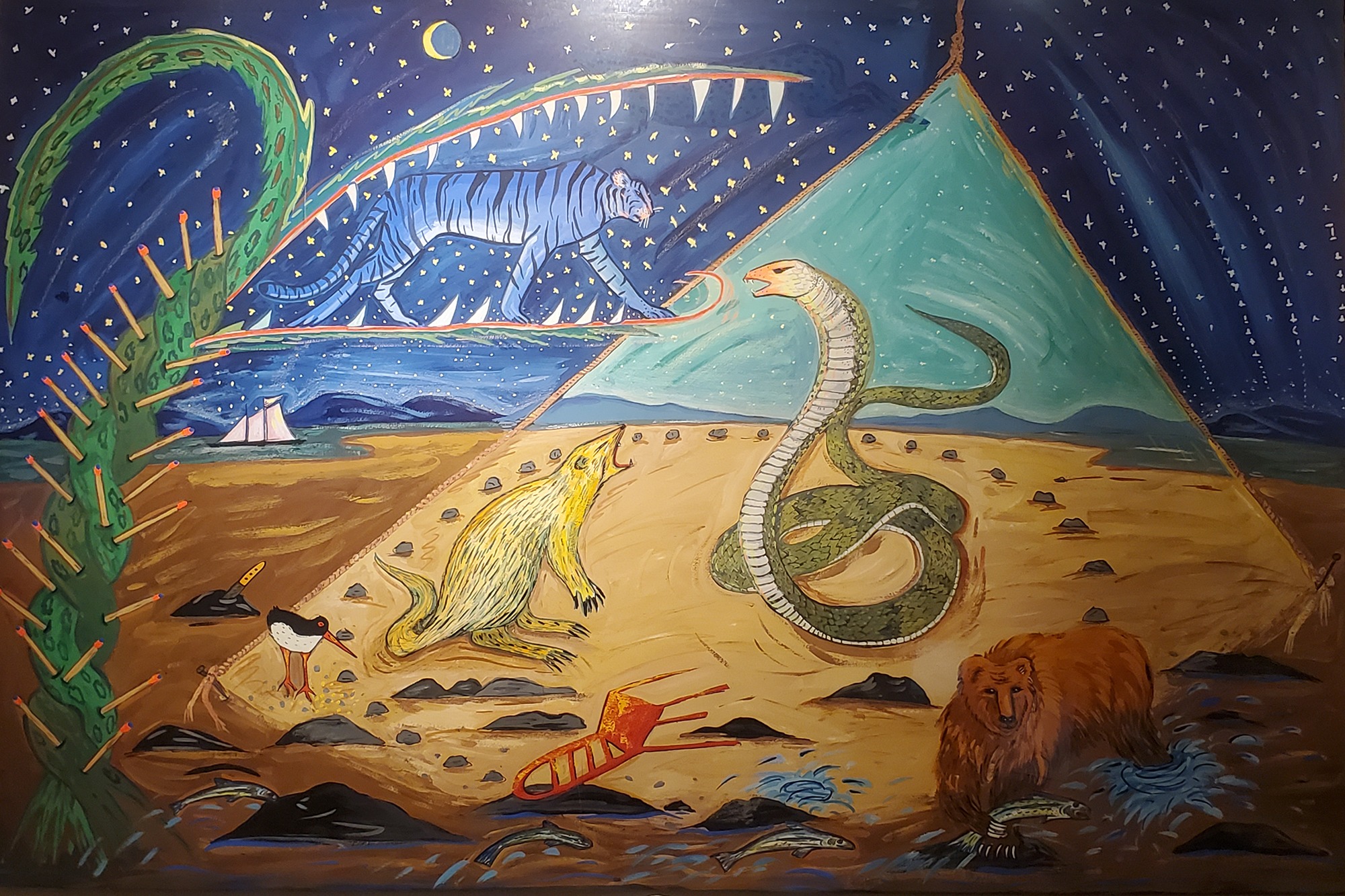 The School of Biological Sciences has many feet of wall space to decorate, and occasionally it has snagged work, commissioned or bought, from notable Utah artists.

For a time a large, vertical painting by the late modernist Douglas Snow hung in the atrium of South Biology (Bldg. 89), but was taken down after a time. (It turns out that biologists have strong opinions about visual art). Where that painting has gone is unknown (probably in the stores of the Utah Museum of Fine Art) but for a time it presided over the Biology Learning Center below it where tutors met with undergrads huddled over tables.

One other original work of art that many in the SBS community may not know about is an original by Bonnie Sucec, a long-time Utah artist who still works out of her bungalow in the 9th and 9th neighborhood of Salt Lake City.

Untitled, as far we know, the acrylic oil (we think) is 46 x 30″ and presents a desert landscape with a ritual stone circle around a half-uncoiled cobra, mouth-agape. This is just the start of a whimsical,

dreamscape in the picture of live creatures and other artifacts under a starry and moon-filled night. There’s the tiger crawling out over the petiole or stem of a plant, embedded with two dozen or so matchsticks and replete with sharp teeth–like a stylized Venus flytrap.

And there’s more: Looks like a badger is barking at the snake while an oblivious bear in the bottom right had corner is fishing for trout. Reminiscent of those creepy Masonic pyramids, a triangle of light bordered by a hemp rope and staked to the ground like a tent, presides over the center of action. Meanwhile, untethered and seemingly arbitrary objects populate the foreground (a tipped over orange chair) and the background (a sailboat on a distant bay).

What is this curious tableau dathat presides over the mailroom adjacent to the biology main office?

To find out, you will need to read more about the artist whose work has been described by arts journalist Ann Poore as “figural, but nonrepresentational – even the artist doesn’t know what is going onto the paper until it appears, sometimes evolving for a month or more — and though I like to tell myself little stories about what I see in her paintings, Sucec would prefer I didn’t.” In response to Poore’s query over one piece in particular, Sucec replies, “It wasn’t intended to be a specific story. You don’t want to try to figure it out.”

The work of Biologists relies on representational not imagistic renderings of subject models. For this reason, most of South Biology, Aline W. Skaggs Biology Building (ASB) and the Talmage building are replete with photos of specimens or, more traditional drawings that you might see out of a textbook or a retrospective of the critters Charles Darwin brought back from the Galapagos Islands during the nineteenth century. But this work, which we will call the cobra painting, floating as it is in a natural wood frame, is something entirely else.

Sucec’s work is broadly shown, within and without Utah, and is well known, sometimes characterized as “magical primitivism,” a pigeon hole she does not approve of. “I am a formally trained artist,” she replies to Poole “somewhat archly, but immediately adds with a smile, I do know what you mean. If you’ve read Gabriel Garcia Marquez, then you know, too.”

Fiction by the late Colombian-based Nobel laureate isn’t the only resonance Sucec has engendered with the writerly world. It turns out that U.S. Poet Laureate Mark Strand who taught at the University of Utah for years and who died in 2014 tapped Sucec to illustrate one of his collections published in 1998. While the book is out of print now, if you can find one to buy, it will set you back by at least $2,000.

So whatever Sucec’s cobra painting “means,” holding up the wall in the mailroom–acting as a mirror into an entirely, incomprehensible by nevertheless compelling world–biologists at the University of Utah can claim this Utah artist as one of their own.