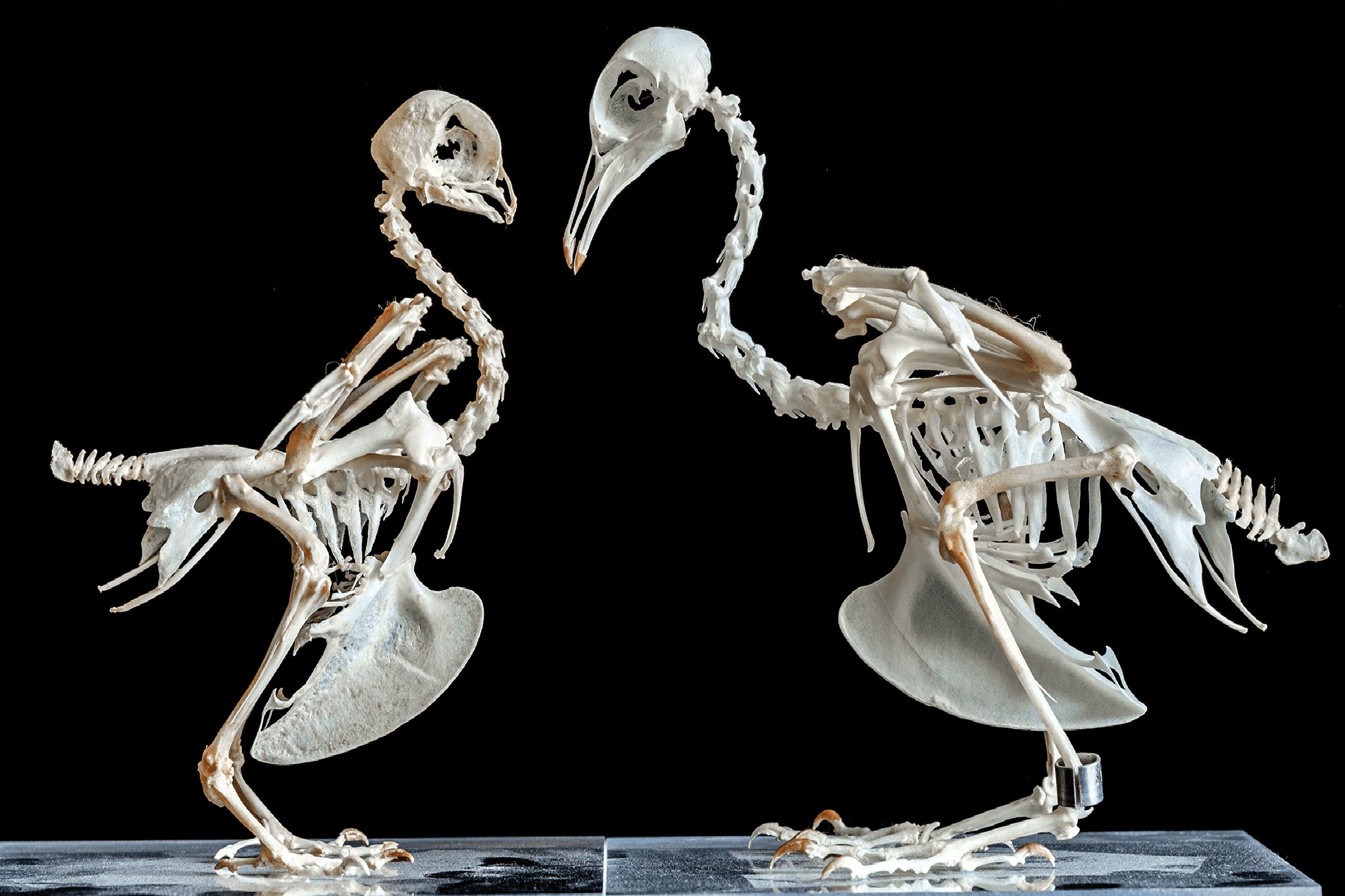 Mutation in the ROR2 gene is linked to beak length in domestic pigeons, has a surprising connection with a human congenital disorder.

Charles Darwin was obsessed with domestic pigeons. He thought they held the secrets of selection in their beaks. Free from the bonds of natural selection, the 350-plus breeds of domestic pigeons have beaks of all shapes and sizes within a single species (Columba livia). The most striking are beaks so short that they sometimes prevent parents from feeding their own young. Centuries of interbreeding taught early pigeon fanciers that beak length was likely regulated by just a few heritable factors. Yet modern geneticists have failed to solve Darwin’s mystery by pinpointing the molecular machinery controlling short beaks—until now.

In a new study, biologists from the University of Utah discovered that a mutation in the ROR2 gene is linked to beak size reduction in numerous breeds of domestic pigeons. Surprisingly, mutations in ROR2 also underlie a human disorder called Robinow syndrome.

“Some of the most striking characteristics of Robinow syndrome are the facial features, which include a broad, prominent forehead and a short, wide nose and mouth, and are reminiscent of the short-beak phenotype in pigeons,” said Elena Boer, lead author of the paper who completed the research as a postdoctoral fellow at the U and is now a clinical variant scientist at ARUP Laboratories. “It makes sense from a developmental standpoint, because we know that the ROR2 signaling pathway plays an important role in vertebrate craniofacial development.”

The paper published in the journal Current Biology on Sept. 21, 2021.

The researchers bred two pigeons with short and medium beaks—the medium-beaked male was a Racing Homer, a bird bred for speed with a beak length similar to the ancestral rock pigeon. The small-beaked female was an Old German Owl, a fancy pigeon breed that has a little, squat beak.

“Breeders selected this beak purely for aesthetics to the point that it’s detrimental—it would never appear in nature. So, domestic pigeons are a huge advantage for finding genes responsible for size differences,” said Michael Shapiro, the James E. Talmage Presidential Endowed Chair in Biology at the U and senior author of the paper. “One of Darwin’s big arguments was that natural selection and artificial selection are variations of the same process. Pigeon beak sizes were instrumental in figuring out how that works.”

The short- and medium-beaked parents produced an initial F1 brood of children with intermediate-length beaks. When the biologists mated the F1 birds to one another, the resulting F2 grandchildren had beaks ranging from big to little, and all sizes in between. To quantify the variation, Boer measured beak size and shape in the 145 F2 individuals using micro-CT scans generated at the University of Utah Preclinical Imaging Core Facility.

“The cool thing about this method is that it allows us to look at size and shape of the entire skull, and it turns out that it’s not just beak length that differs—the braincase changes shape at the same time,” Boer said. “These analyses demonstrated that beak variation within the F2 population was due to actual differences in beak length and not variation in overall skull or body size.”

Next, the researchers compared the pigeons’ genomes. First, using a technique called quantitative trait loci (QTL) mapping, they identified DNA sequence variants scattered throughout the genome, and then looked to see if those mutations appeared in the F2 grandkids’ chromosomes.

The team then compared the entire genome sequences of many different pigeon breeds; 56 pigeons from 31 short-beaked breeds and 121 pigeons from 58 medium- or long-beaked breeds. The analysis showed that all individuals with small beaks had the same DNA sequence in an area of the genome that contains the ROR2 gene.

“The fact that we got the same strong signal from two independent approaches was really exciting and provided an additional level of evidence that the ROR2 locus is involved,” said Boer.

The authors speculate that the short-beak mutation causes the ROR2 protein to fold in a new way, but the team plans to do functional experiments to figure out how the mutation impacts craniofacial development.

The lure of the domestic pigeon that mesmerized Darwin is still captivating the curious to this day. Many of the blood samples that the research team used for genome sequencing were donated from members of the Utah Pigeon Club and National Pigeon Association, groups of pigeon enthusiasts who continue to breed pigeons and participate in competitions to show off the striking variation among breeds.

“Every paper our lab has published in the last 10 years has relied on their samples in some way,” said Shapiro. “We couldn’t have done this without the pigeon breeding community.”

By Lisa Potter
Research communications, U Communications
This article which is being picked up broadly by the global media, including the Daily Mail (UK), originally appeared in @theU.

The James Talmage Presidential Endowed Chair which Professor Shapiro currently holds is typical of the kinds of support available to the best and most promising of the SBS faculty.

Donors establish an endowed chair in their own name or the name of someone they would like to honor often through estate/planned giving.

For more information on setting up a vehicle of this kind, as well as other funds you can gift to to support biology researchvisit here.