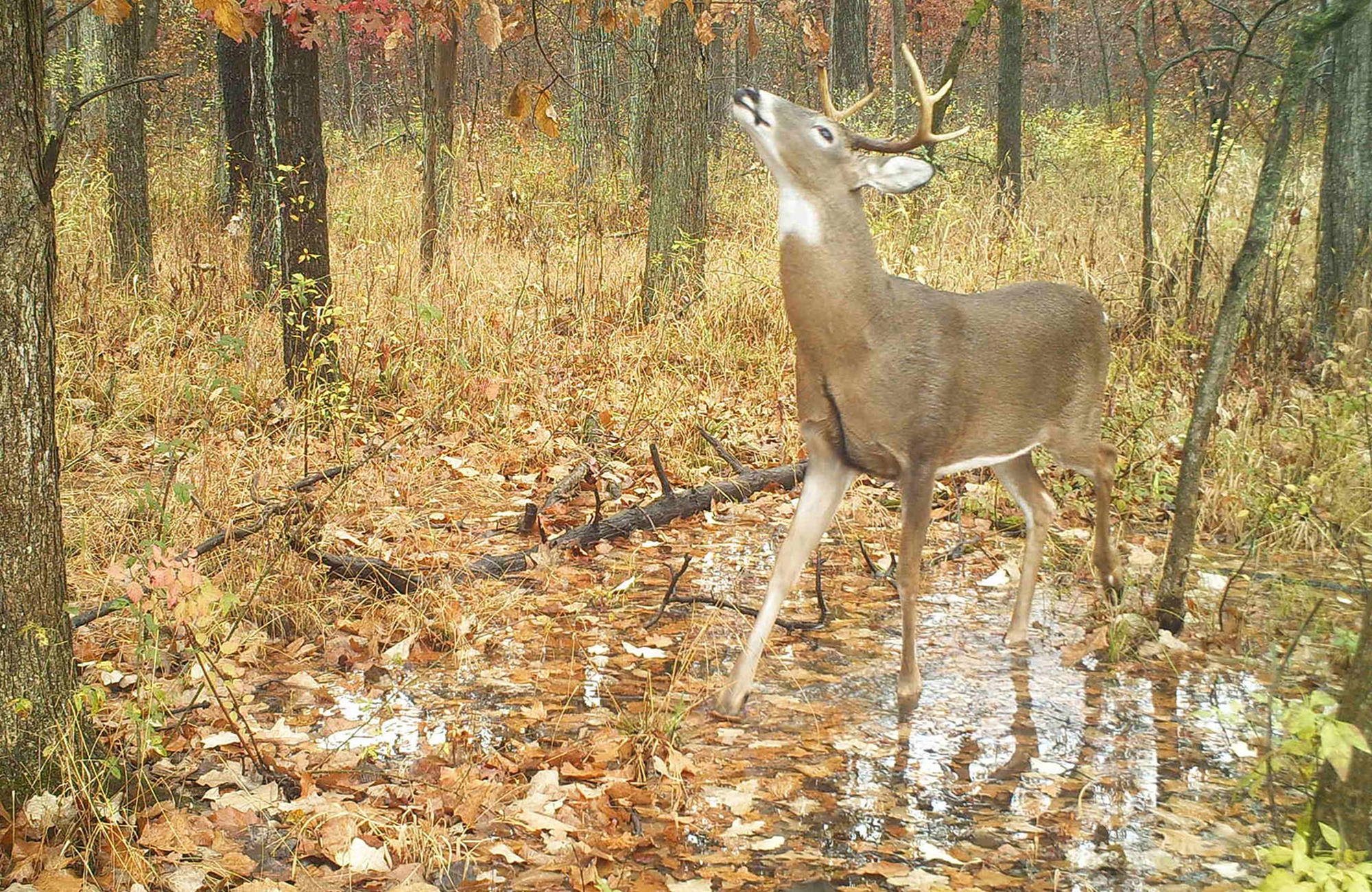 City dwellers seldom experience the near-reverence of watching deer walk through their yards, both for a lack of deer and, often, a lack of a yard. In cities, not everyone has the same experiences with nature.

That means that the positive effects of those experiences—such as mental health benefits—and the negative effects—such as vehicle strikes—are unequally distributed. Urban ecologists have proposed that income and biodiversity may be related, such that a so-called “luxury effect” may lead to more biodiversity in landscaped, affluent suburban neighborhoods.

New research, however, published in Global Change Biology, suggests that while there is an association between income and diversity of medium to large mammals, another factor is stronger: “urban intensity,” or the degree to which wild lands have been converted to densely-populated, paved-over grey cities.

“Wildlife have all sorts of interactions with people, both positive and negative,” says Seth Magle, director of the Urban Wildlife Institute at Lincoln Park Zoo in Chicago. “So finding that wildlife are distributed unequally in different types of neighborhoods also means these benefits and costs are not equally shared. Cities are a form of nature, but that nature is not the same block-by-block, which has profound effects on the people who live on those blocks.”

“Urban nature provides a myriad of opportunities to affect human health and well-being,” adds doctoral student Austin Green of the School of Biological Sciences, University of Utah. “Everyone should be given the opportunity to experience it, no matter where your neighborhood is.”

The research is funded by the Abra Prentice-Wilkin Foundation and the EJK Foundation.

It’s known that animal biodiversity decreases in the urban cores of cities, and as ecologists have explored the factors that might explain this trend, some found a relationship between an area’s income level and its biodiversity. They termed it the “luxury effect,” in which the social behaviors of those in wealthy neighborhoods may create a favorable environment for natural biodiversity.

“Like most theories in urban ecology, I’d say it’s in the ‘maybe-possibly-we think so’ realm, found by a number of researchers, not found by others,” Magle says. The luxury effect holds well for some birds and plants in single-city studies but hadn’t been explored for medium-to-large sized mammals, he adds. It also hadn’t been examined by comparing multiple cities to each other.

So Magle, ecologist Mason Fidino, Green and other researchers banded together into a coalition called the Urban Wildlife Information Network, or UWIN, to conduct a study in 20 major U.S. cities. All of the city-level studies used the same methods, simplifying comparisons between them.

“Simply put, UWIN makes it so the differences we find are ecological, not methodological,” says Fidino of Lincoln Park Zoo’s Urban Wildlife Institute.

The researchers set up automatic trail cameras in 20 cities across the United States. The cameras watched for medium-to-large mammals (ranging in size from a squirrel to a moose) in locations between the urban core and the outskirts of each city between July 2016 and January 2020. The most common mammal found was the raccoon – spotted more than 20,000 times in all but one of the study cities. The least common? The North American porcupine, spotted only 29 times in Salt Lake City, Utah and Edmonton, Alberta, Canada.

In all, the researchers detected 45 species of mammals, although some were too rare to be included in the multi-city analysis (i.e. porcupine, fisher, and black-tailed prairie dog). Iowa City, Iowa proved to have the most species on average, with 18, and Phoenix, Ariz. had the least, at 10. Phoenix also showed the strongest urban decreases in mammal diversity, with only one-third as many species in the urban core as in the outskirts.

The researchers correlated the number of species detected at a location with the location’s median income. Did they find evidence of the “luxury effect?” Kind of. Nine of the 20 cities showed a significant luxury effect, with Saint Louis displaying the strongest correlation between biodiversity and income.

But urban intensity proved to be a much stronger correlation with mammal biodiversity. Urban intensity takes into account the amount of vegetation, amount of impervious land cover (i.e. concrete and asphalt, which doesn’t let water infiltrate into the soil) and population density.

“It makes sense to me that urban intensity, by which we mean the transformation of the landscape into one that’s paved and modified for human use, will have tremendous implications for habitat and therefore the wildlife that can persist in that space,” Magle says.

Median household income, adds Green, “gets into the details and mechanisms of how a neighborhood is designed versus the dichotomy between undeveloped and developed land.”

To be clear, the data didn’t show that mammals can’t live in urban areas, but rather that you’re more likely to see a smaller set of species, like raccoons and grey squirrels, in cities since some other species, like deer, can’t live in that environment.

Magle adds that deer and their relatives, called ungulates, are highly sensitive to the urban environment, possibly due to a rigid grass-eating diet and behavior pattern. Raccoons, on the other hand, are adaptable, embracing the smorgasbord of the city.

“They certainly weren’t eating trash a few hundred years ago, right?” Magle says. “Some of this is body size, some of it is behavior and adaptability. Some of it is human tolerance and our ability to exclude species from certain spaces, too.”

Green says that this adaptability means that in the Salt Lake City, Utah area, the hotspots for raccoons and red fox are in the city and the suburbs. They’re much rarer, he says, in the adjacent natural areas.

What to do with the luxury effect hypothesis

Does the luxury effect hypothesis need to be rethought? The researchers don’t think so, especially because the correlation between income and mammal biodiversity was present in all cities studied, although only to a statistically significant degree in nine of them. If anything, it suggests a need for a deeper dive of research to discover the entanglements of income, urban planning and biodiversity.

“I think we need to dive into why this seems to be stronger in some cities than others, and especially we need to move beyond thinking about just per capita income to really delve into specific factors that make some neighborhoods, which may happen to be wealthier, more suitable for specific species,” Magle says. “We’ve got to dig right into this thing and find mechanisms!”

“If we can start to disentangle the mechanisms responsible,” says Mary Pendergast, an ecologist and conservation biologist with the Wild Utah Project, “we can start to bridge the gap between documenting differences and producing recommendations for conservation planning and adaptive management practices that can increase habitat function and connectivity in and around urban spaces.” Some of those adaptive management practices, she says, include strategic avoidance or placement of impermeable surfaces, wildlife overpasses/underpasses/bridges and speed limits for addressing vehicle-wildlife collisions.

“Most of my previous work has been related to common species we see in Chicago,” Fidino says, “so the surprising thing for me was to be able to quantify how a very large chunk of medium to large terrestrial mammals respond to income and urbanization gradients within and among cities. As urban ecologists, we need to do a better job contextualizing the urban environment we study as a common species in your city may be rare elsewhere or respond to urbanization in a different way.”

Green says that the study showed him that the distribution of exposure to nature and biodiversity throughout urban environments is yet another example of the inequities literally built into our environments. He hopes residents of urban areas will advocate for more equitable upkeep of urban nature.

“The difference in the management of green spaces seems to also correlate with income,” he says, “and pushing for initiatives that distribute land management in cities more equitably could really have an effect.” He also suggests that suburban residents reshape their view of their yards. “After all, grass is the most cultivated crop on our planet. Think of all that available land area that could be converted to both wildlife habitat and food resources!”

Such decisions in favor of wildlife and biodiversity come back again to benefit people.

“We can remember that cities aren’t just habitats for us,” Magle says. “They house all manner of creatures and thinking about them when we make decisions like what kind of garden to plant or how to store our garbage can, I believe, lead to wilder and more equitable cities.”

This article originally appeared in @TheU.