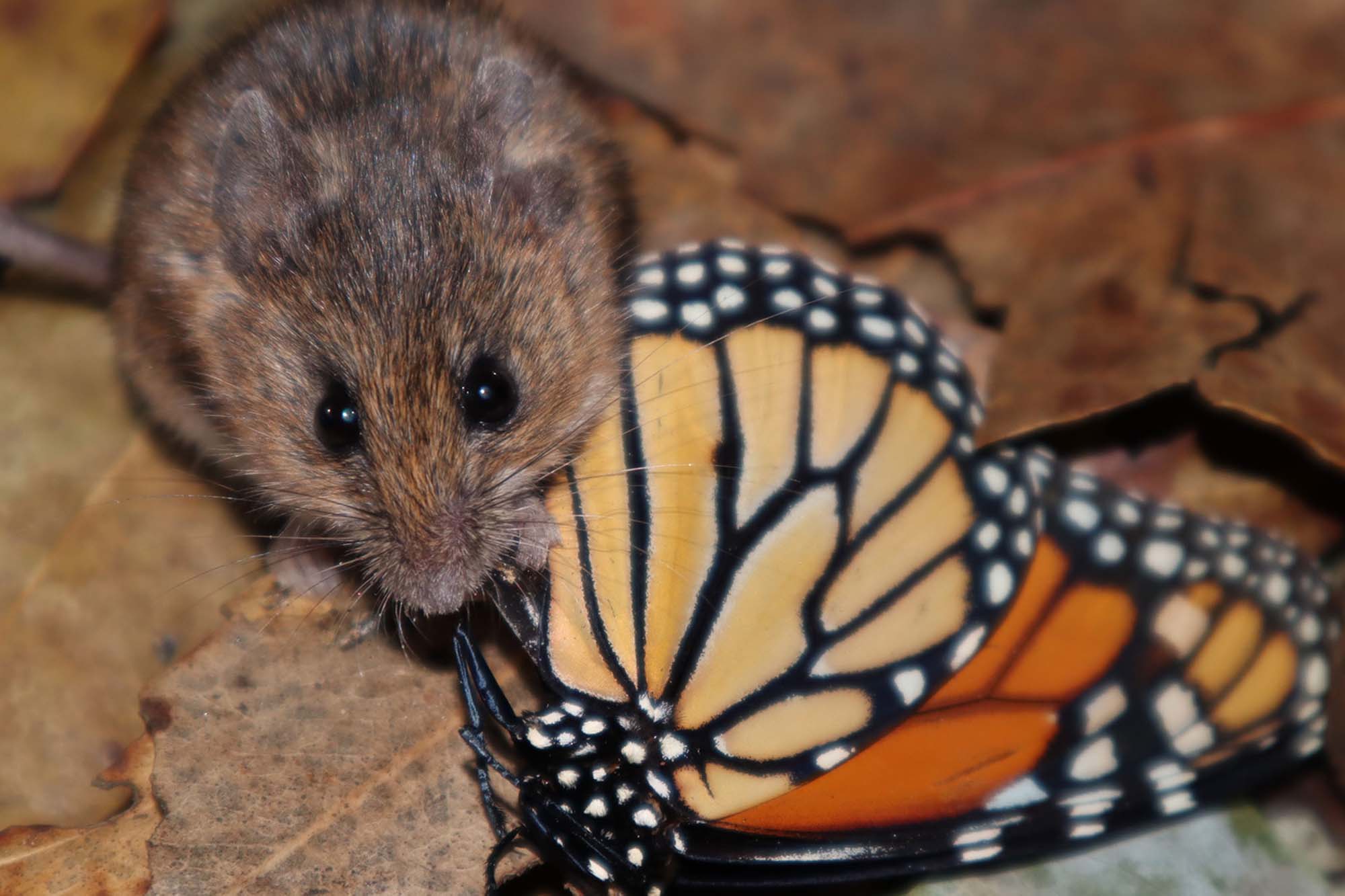 Monarch butterflies possess a potent chemical armor. As caterpillars, they eat plants filled with toxic cardenolides that build up in their bodies and make them unpalatable to most—but not all—predators. In central Mexico, where the largest winter monarch aggregations occur, scientists observed that rodents attack monarchs that fall to the ground. In particular, the black-eared mouse (Peromyscus melanotis) specializes in these bitter-tasting insects, eating as many as 40 per night.

In a new study, University of Utah biologists found that mice at California monarch overwintering sites can also consume monarch butterflies. Working at one of the largest monarch aggregations outside of Mexico, Pismo State Beach Monarch Butterfly Grove, the researchers discovered that the western harvest mouse (Reithrodontomys megalotis) also ate the grounded monarchs. However, with the precipitous decline in western monarch populations, this butterfly buffet may be in jeopardy.

The authors do not think that rodents are contributing to the western monarch decline, nor that the monarchs are the only thing that mice can eat. Rather, documenting this new feeding behavior is a reminder of how little we know about the interactions that may be lost as insect populations decline.

“We are in an insect apocalypse right now. There are estimates that 40% of studied invertebrate species are threatened and that over 70% of flying insect biomass is already gone. This is devastating on its own and is also going to have enormous impacts on the other organisms that feed on insects,” said Sara Weinstein, the postdoctoral researcher who led the study.

“Western monarchs and other western butterflies need conservation attention and part of that awareness-raising is illuminating the many ways these animals are interconnected to other insects, birds, mammals, as well as our human communities. This study helps us appreciate more deeply how fewer butterflies means less food for other native animals” said Emma Pelton, senior conservation biologist at the Xerces Society.

To study mouse-monarch interactions, the researchers first trapped rodents in the grove in February 2020. The rodents were released, but their feces were kept to screen for monarch DNA—which they found in one sample. This first survey occurred in late winter as monarchs were leaving the aggregation and few remained for mice to munch. Weinstein and colleagues intended to return the following fall during peak monarch season. However, after years of decline, the western monarch population crashed.

“At a site where 100,000 butterflies used to roost, in 2020 there where were fewer than 200 monarchs. So, we had to change tactics,” Weinstein said. “We tested whether rodents would feed on the butterflies using captive-reared monarchs.”

“Many rodent species are likely to have some resistance to cardenolides in monarchs, due to genetic changes at the site where these toxins bind,” said Weinstein. “The Pismo Grove is one of hundreds of western monarch aggregation sites, and it seems likely that, at least in the past, rodents throughout the western monarch range may have supplemented their winter diets with monarchs. If you can handle the cardenolides in a monarch, their bodies are full of fat and offer a pretty good meal.”

This meal will be a lot harder to find, as over 90% of western monarchs have disappeared in the last 40 years. The missing beauties will surely impact the ecosystem that depends on them for food.

“When monarch numbers crashed last year and the project started to go sideways, Sara cleverly rescued it by growing her own monarchs and obtaining frozen ones from researchers,” said Denise Dearing, senior author of the study and Distinguished Professor of biology at the U. “Her creative solution advanced our understanding of the interactions between mice and monarchs, even during a time of limited monarch numbers.  It lays the groundwork for future research in this area.”