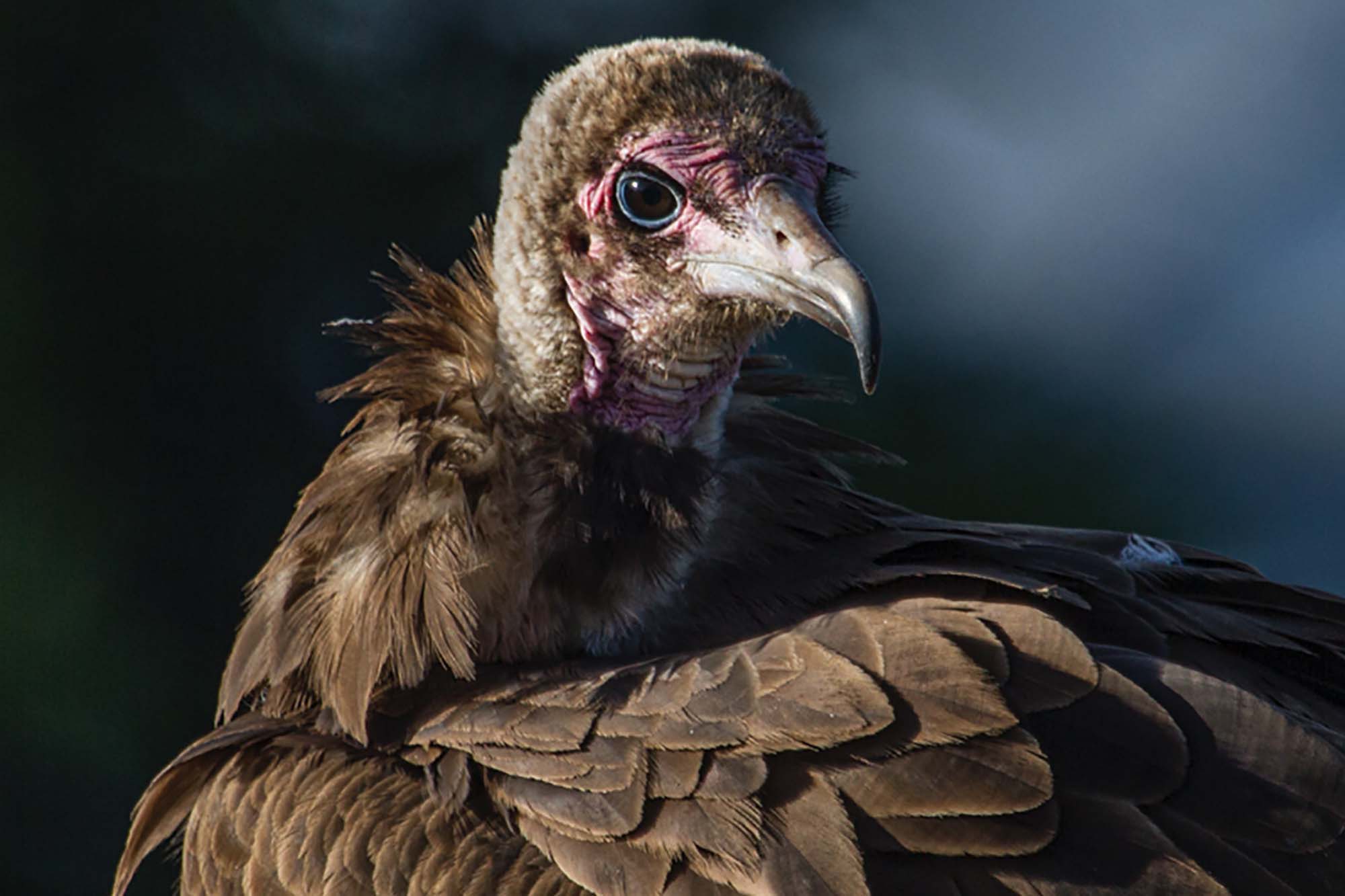 In the yards behind the slaughterhouses—also called abattoirs—of Ethiopia, an ecological shift is unfolding that has echoes of similar crises all over the world.

Species with a clear and effective ecological role are in serious decline, and the less-specialized but more aggressive species that have moved in to take their place are not only less effective, but are harmful to their ecosystem which, in this case, includes humans.

This is a story about vultures, feral dogs, rabies—and piles of rotting animal carcasses. Buckle up. But in the end, it’s about the power of conservation to keep ecosystems, even urban ecosystems, in balance, benefitting the people who live there.

“Carrion consumption by vultures is declining, and increasing by most other scavengers, but that increase is not sufficient enough to make up for the loss of vultures.” says SBS alumnus Evan Buechley, PhD’17, now with The Peregrine Fund, “So there’s a gap there. And what happens with that gap is a bit of an unanswered question, but that’s where the problem lies.”

The study is published in the Journal of Wildlife Management and is funded by the National Science Foundation, the University of Utah, HawkWatch International, The Peregrine Fund and the National Geographic Society.

Worldwide, vultures are perfectly equipped to take care of the unpleasant remnants of death. Rotting carcasses can become hotbeds of disease, overrun by bacteria and insects. But vultures are an efficient clean-up crew. By eating carrion, they remove the carcasses and pass them through a highly acidic digestive system that wipes out disease-causing agents. And a diversity of vultures is better—some species are specialized to tear away hides and skin while others, coming in last, literally gulp down the bones.

But vultures have been in trouble in recent decades. They’re susceptible to poisons in the carrion they eat, whether that’s lead ammunition, the drug diclofenac, or poisons used against predatory animals. And with vultures producing relatively few chicks and taking a relatively long time to mature, it’s harder for them to recover from population declines.

Çağan Şekercioğlu, associate professor in the University of Utah School of Biological Sciences, showed that vultures were the most threatened group of birds (called an ecological guild, when the group uses the same or related resources) in 2004 when he conducted the first known ecological analysis of all bird species while in graduate school.

In 2012, Şekercioğlu accepted Buechley as his first doctoral student at the U. Buechley brought extensive experience working with vultures and condors. He and Şekercioğlu began a project tracking Egyptian vultures in eastern Turkey and the Horn of Africa.

“Evan led this project brilliantly and expanded it to the other vulture species of Ethiopia and the Horn,” Şekercioğlu says. “Despite the many challenges, he also decided to study the scavenger communities of the Addis Ababa abattoirs, to quantify the causes and consequences of vulture declines in the region.”

In 2016, Şekercioğlu and Buechley re-analyzed the ecology of all bird species. “We realized that vultures not only have the fewest species of any avian ecological guild, making them irreplaceable, but since that first analysis in 2004, they had gone downhill faster than any other group,” Şekercioğlu says.

Yes, there are other scavenger species that can take vultures’ place at the carrion table. But the loss of vultures, as we’ll see, can lead to human costs.

At the abattoirs of Ethiopia, vultures are welcome partners. After butchering animals in clean conditions, the workers move the remnants of the carcasses – hooves, organs and bones, for example, to separate compounds. It’s a . . . unique sensory experience, Buechley says.

“It can be pretty stinky and pretty gross, by any objective measure.”

So abattoirs are grateful for the scavengers, including critically endangered white-backed, Rüppell’s and hooded vultures, that eagerly clean up the pile.

Study co-author Alazar Daka Ruffo, from Addis Ababa University, has interviewed abattoir staff members to see how they feel about the vultures.

“Some abattoir staff say half-jokingly, but not fully, that they see the vultures as employees of the abattoir,” says Buechley, reporting Ruffo’s findings. “They’re serving an important function. There’s intentionality behind the system.”

“It’s an urban ecology situation where you have the human food supply meeting and really directly interacting with the wildlife food supply of scavengers,” Buechley adds. “It’s just a really complicated, kind of gross but fascinating system.”

With a research team including Rebecca Bishop, Tara Christensen and Şekercioğlu from the U’s School of Biological Sciences, Buechley set out to quantify the amount of carrion consumed by scavengers at six abattoirs in Ethiopia over five years, from 2014 to 2019.

Decline in vultures and rise in rabies

The team noted the types and abundance of scavengers that visited the abattoir buffets, and used this to extrapolate how much they ate. At first, vultures were eating more than half of the carrion in the disposal piles. White-backed, Rüppell’s and hooded vultures together ate an average of around 550 pounds (250 kg) of carrion a day.

But by the end of the five-year study, the number of Rüppell’s and white-backed vultures visiting the abattoir disposal yards decreased by 73%. Hooded vulture visits decreased by 15%. Over the same time, feral dog detections more than doubled.

“Although we can’t say for sure if the decline represents a population crash or if the vultures are being displaced by dogs and moving away from the abattoirs, either way this is really concerning,” says Megan Murgatroyd, Interim Director of International Programs for HawkWatch International.

“We know that the vultures are declining and we know that the feral dogs are increasing, but we don’t know exactly why,” Buechley says, adding that abattoir practices are also changing and that further studies will be needed to draw a cause-and-effect relationship.

Regardless, the vultures can ill afford the loss of abattoirs as a food supply. Rüppell’s, white-backed and hooded vultures are listed as critically endangered. “That’s the highest threat category before going extinct or extinct in the wild,” Buechley says.

“So it does seem that their disappearance from abattoirs is likely linked to a population crash,” says Murgatroyd. “Vultures need all the help they can get right now, and having to compete with growing dog populations is only making things worse.”

Other scavengers on the rise, including dogs, ibises and corvids (crows and ravens) couldn’t pick up the slack at the abattoirs. By 2019, scavengers were consuming nearly 43,000 pounds (around 20,000 kg) less carrion per year than they were in 2014, back when vultures were more abundant and dogs more scarce.

A chilling consequence of the rise of dogs may be a rise of rabies rates in humans. In the late 1990s, vulture populations in India and Pakistan crashed. Feral dog populations increased to take advantage of the uneaten carrion.

“They’re also disease vectors,” Buechley says, “and they interact really closely with people. And there’s been a link drawn between a big spike in feral dog populations and rabies in India.”

Is the same thing likely to happen in Ethiopia? Scientists haven’t yet drawn a link between vulture loss and rabies rise in that country. But Ethiopia already bears a heavy rabies burden with around 3,000 deaths from the disease per year.

“Unlike a lot of diseases which impact the elderly, rabies disproportionately affects young children, which are the most likely to be bit by rabid dogs,” Buechley says.

The researchers provide a straightforward recommendation to help the situation: Use fences to keep the dogs out. And many abattoirs already have fences in place.

“But a pack of feral dogs is really persistent,” Buechley says. “It’s hard to keep hungry animals away from lots of food.”

The dogs can fight and dig their way through many fences, and maintaining or fortifying them may cut into the abattoirs’ profit margins.

“It’s a matter of weighing how important it is to keep the fences maintained,” Buechley says. “Improvement of these fences could really have a lot of benefits.” Those include potentially reducing the numbers of feral dogs, which reproduce quickly and whose population keeps pace with the available food supply. That in turn could help control rabies in humans and diseases in other animals, such as the critically endangered Ethiopian wolf, which are carried by the feral dogs.

And, counterintuitively, fencing out the abundant dogs could increase the rates of carrion consumption. Without the dogs around to scare off other scavengers, vultures could return in larger numbers to more quickly and efficiently clean up the disposal piles.

“That could lead to less smell, less groundwater contamination, fewer insects like flies that can breed on the carcasses,” Buechley says. “There’s a lot of potential benefits of investing in repairing the fences around abattoirs, which are found throughout Africa and elsewhere worldwide. We encourage abattoirs, local governments and international organizations to consider this when looking for solutions to waste disposal, human health and scavenger conservation.”

The results of the study show that the loss of specialist species from an ecosystem can’t always be compensated for by other species.

“The overarching point is that vultures are super important,” Buechley says. “If they decline, we expect there to be pretty profound ecological consequences and there may be increases in human disease burden. And so we should appreciate vultures and invest in their conservation.”