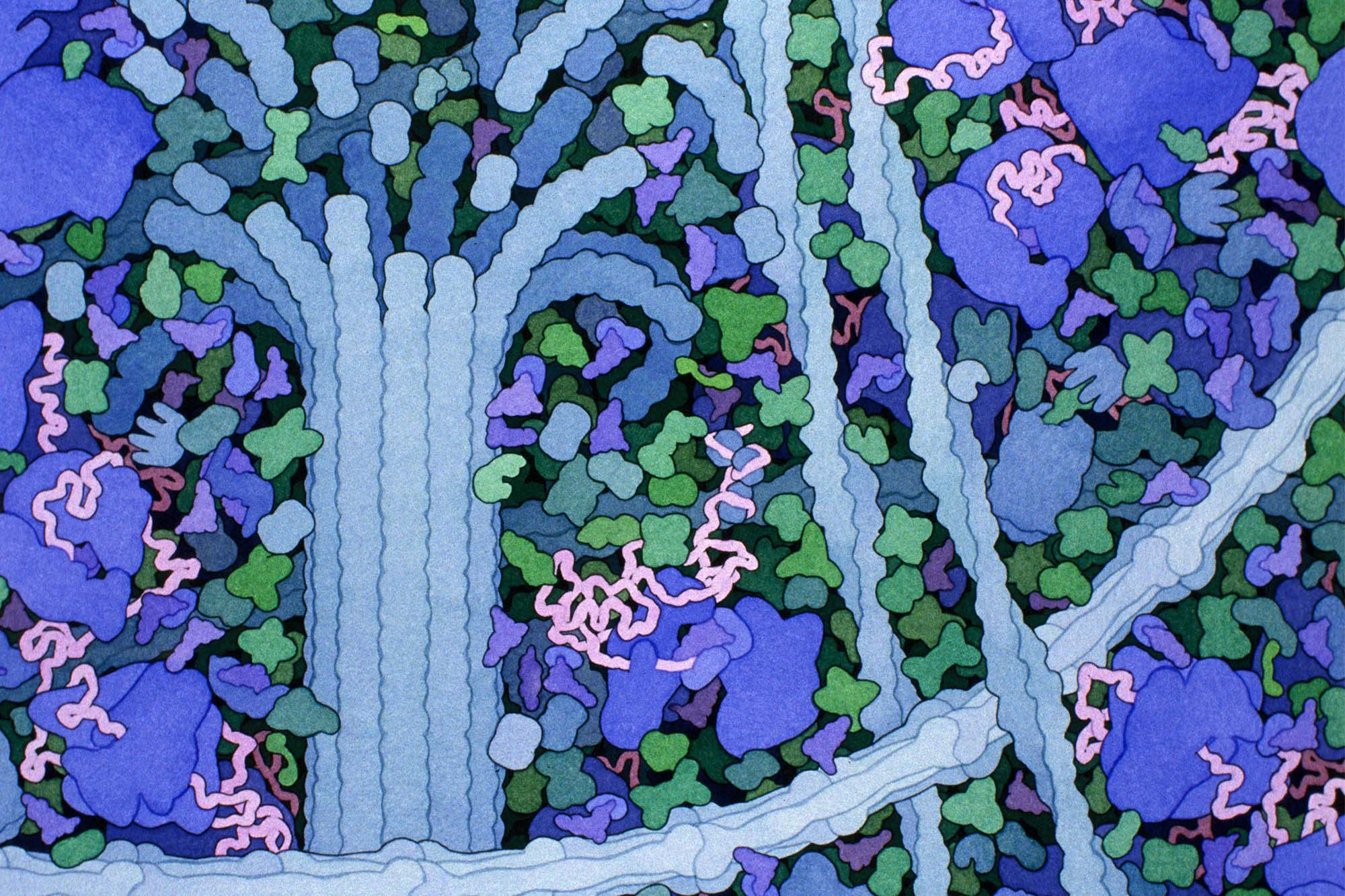 … Nature is what we know –
Yet have no art to say –
So impotent Our Wisdom is
To her Simplicity.

Even before Andreas Vesalius (1514-1564) first put pen to paper to draw the human form in anatomical detail, scientists have illustrated their findings, not only to share information but to find greater footing on the terrain we call biology: the science of life.

These models have taken on new urgency with the advent of cell biology, where subjects are even smaller than cells. “This is an invisible space,” Janet Iwasa, molecular visualization expert and Assistant Professor of Biochemistry at the U, reminds us. “Most molecules are smaller than the wavelength of light. These things are moving at a time scale that is not intuitive. When the study objects are so foreign, you have to rely on creative approaches to describe them.”

For Iwasa, those approaches involve scientifically accurate digital animations which have cracked open an entirely new way of viewing diverse molecular and cellular processes. Information-rich and visually compelling visualizations that capture current understanding is what this classically-trained biologist has made a name for herself with.

The need for reconsideration of the visual language that renders the invisible became urgent after a 2009 publication in Science of a much-cited article. The seminal paper posited that cellular structures called P granules are liquid droplets, and that they specify the future germline in a developing embryo through controlled dissolution and condensation.  This paper ignited one of the hottest ‘trends’ in cell biology – the study of biological liquid condensates – and earned the lead authors numerous prizes, including, most recently, the prestigious Breakthrough Prize.

For Ofer Rog, Assistant Professor and Mario Capecchi Chair in the School of Biological Sciences, this revelation completely revised the interpretation of his experiments, but also brought with it “whole sets of biological issues.” The existence of crowding in the cell was one of them. No longer could he try to reduce the behavior of the chromosomes he was studying to properties of single molecules that make them up. “Rather,” says Rog, “we had to understand them as collective or ‘emergent’ behavior.”

With this new understanding, Rog felt “stuck” in his teaching and research with an old graphical language which “was really great for depicting things that are best understood as single objects, but not so great to describe how big clusters work together, to describe how molecules interact with each other much more loosely and much more dynamically.” The recognition of the flexibility and dynamics of cellular components led to the impulse to better honor that complexity graphically.

“I started looking at papers, and how uniform they were,” Rog says. “Papers that were clearly written with a lot of careful attention to details, with exquisite experiments and data, were using graphical models that were very simplistic, inadequate to really capture . . . our new understandings about biology. I started wondering, ‘How did people solve this in the past? Who should we talk to?’ It wasn’t super clear. So I went and talked to Janet.”

They say the most dangerous thing one can do is to introduce one person to another. It’s a tongue-in-cheek caution, reminding us how conversations, then collaborations, then innovations start. So it was with Iwasa’s animation expertise which, as part of her Animation Lab at the University of Utah, has already animated many subjects, including the life-cycles of HIV and SARS-CoV-2. Now the lab is pairing its expertise with Rog’s condensate research.

“We have a lot of people, like Ofer,” says Iwasa, “who are educators and who have been using our animations for their courses. Condensate research is so new, compared to other big concepts in biology, that a lot of textbooks don’t even cover it. So, having some visual materials for educators who need an intuitive way to introduce these ideas to students was something we were thinking about.” Iwasa’s team had already interviewed undergraduate instructors to find out how they were teaching about condensates and what kinds of challenges they were facing.

And how were professors like Rog teaching about this new paradigm? Not easily, it turns out. The terrain was daunting. Intrigued, the Animation Lab began collaborating with Rog and other cell biologists to better illustrate condensates. “This new paradigm,” writes Rog and Iwasa of their collaboration, challenges “the 20th century textbook view of cellular compartmentalization.” Condensates, she says, seem to play important roles in cells’ normal functioning and in disease, and, naturally, these concepts are now making their way into undergraduate classrooms.”

Above: Generic-Membrane-Bound-Organelle. Video by Margot Riggi  | Terms of Use: Creative Commons Licensing CC BY 4.0

Metaphors can be dangerous

Introducing two people is not the only dangerous thing to happen out there. There are implications of and uses for blending digital animation with biology and other sciences: representations–visual or verbal–are essential tools but at the same time impose biases. Because of simplification, “metaphors can be dangerous,” Iwasa concedes. “[P]eople don’t know how far they can carry them on a molecular level.”

The “language” of graphic representations, according to Rog, have tended to focus on single atomized cell components, and also incorporated implicit assumptions taken from our daily lives.

Iwasa agrees. Imagining the molecular space is “unintuitive, since it is unlike the air- and gravity-filled world we live in. What does a molecule experience being inside the cell? It’s just very different and hard to conceive. Some metaphors can be misleading. For example, there are proteins in the cell that move using a walking-like motion. Says Rog, “We walk in air, but when a molecule “walks,’ it’s the equivalent of us walking through Jell-O . . .”

“. . . Or walking in one of those children’s ball pits,” interjects Iwasa. “Except the balls are as big as you are, and you’re constantly bumping into everything, having to push things around.” The constant collisions, the extreme crowding: biologists know about these qualities, but because they don’t often depict that space, “it’s easy to forget and not to consider that, and that influences the types of experiments and the types of models we create.”

Illustrations did occasionally remind biologists of the crowded environment that occupies their objects of study. David Goodsell, a structural biologist and watercolor artist at the Scripps Research Institute in San Diego, is famous for his colorful illustrations of the interior of cells. These paintings are based on state-of-the-art knowledge of what is in the cell–what molecules exist in different sub-cellular compartments and what structures each of them adopts–but also capture the incredible complexity of the cell and, crucially, its crowdedness.

The new science of condensates relies on crowding for the ability of cellular structures to come together and fall apart. Rog, excitedly, returns to the human model and talks about “a thousand objects, like humans, in a crowded subway station, loosely associated” which, nevertheless, remain discrete individuals. How do those individuals behave separately? And how does that behavior change when they function as a collective?

New visual language and recent technological development promise to do a better job of depicting such complexity. Such representations continue to inform scientific discourse, as startling and revealing as 16th Century drawings brought to life through Vesalius’s magisterial bodies-in-motion.

Which leads us to the Re-Imagining a Cellular Space Occupied by Condensates symposium and workshop, borne out of the ready collaboration between Rog and Iwasa. While the Animation Lab’s initial foray into condensates was, in the beginning, educationally focused, that somewhat limited approach may now be at an inflection point.

“When Ofer and I talked,” says Iwasa, “we agreed that the research community had not yet reached any sort of consensus on how best to represent condensates. So our attempts to capture condensates by animation didn’t have a visual language to fall back on.”

Greater consensus may emerge at the symposium & workshop on October 11-13. Unlike the many traditional meetings dedicated to condensates, where scientists present and debate the minute details of their experiments, here scientists will interact with illustrators and other “tool builders,” to discuss the visual language of condensates.

While there is always a risk in illustration (including digital animation) of simplifying things too much and thus restricting future perceptions and scientific understanding, the symposium also pre-supposes that the conversation is essential. In short, the gathering promises to “daylight” how biologists represent a subcellular world in enabling as well as disabling ways, seeking “to build a community that will construct a visual language and new tools that will accurately capture the complexity of molecular condensates.” These representations will help generate experimentally-testable hypotheses, and will lead to the development of new techniques for scientific communication and teaching.

“One of the things that we realized,” says Rog, “is that challenges similar to the one we are facing now, in the condensate field, must have been figured out by other fields in the past, in biology and outside biology.” Symposium participants will include experts from diverse disciplines: about one-third of the participants are biologists, actively engaged in condensate research; one-third will be visualization and computation specialists—like watercolorist David Goodsell mentioned above—but also modeling experts, data visualization specialists, and molecular animators.

The final one-third will come from fields that are not commonly engaged with molecular biology but that have long been thinking about space and ways to represent it. This last group includes software and virtual reality developers and academics in architecture and history.

The symposium will take place at the Crocker Science Center at the University of Utah, on October 11, 2022, 9 AM to 5 PM, and is open to the public. It will be followed by a two-day workshop (by invitation only).