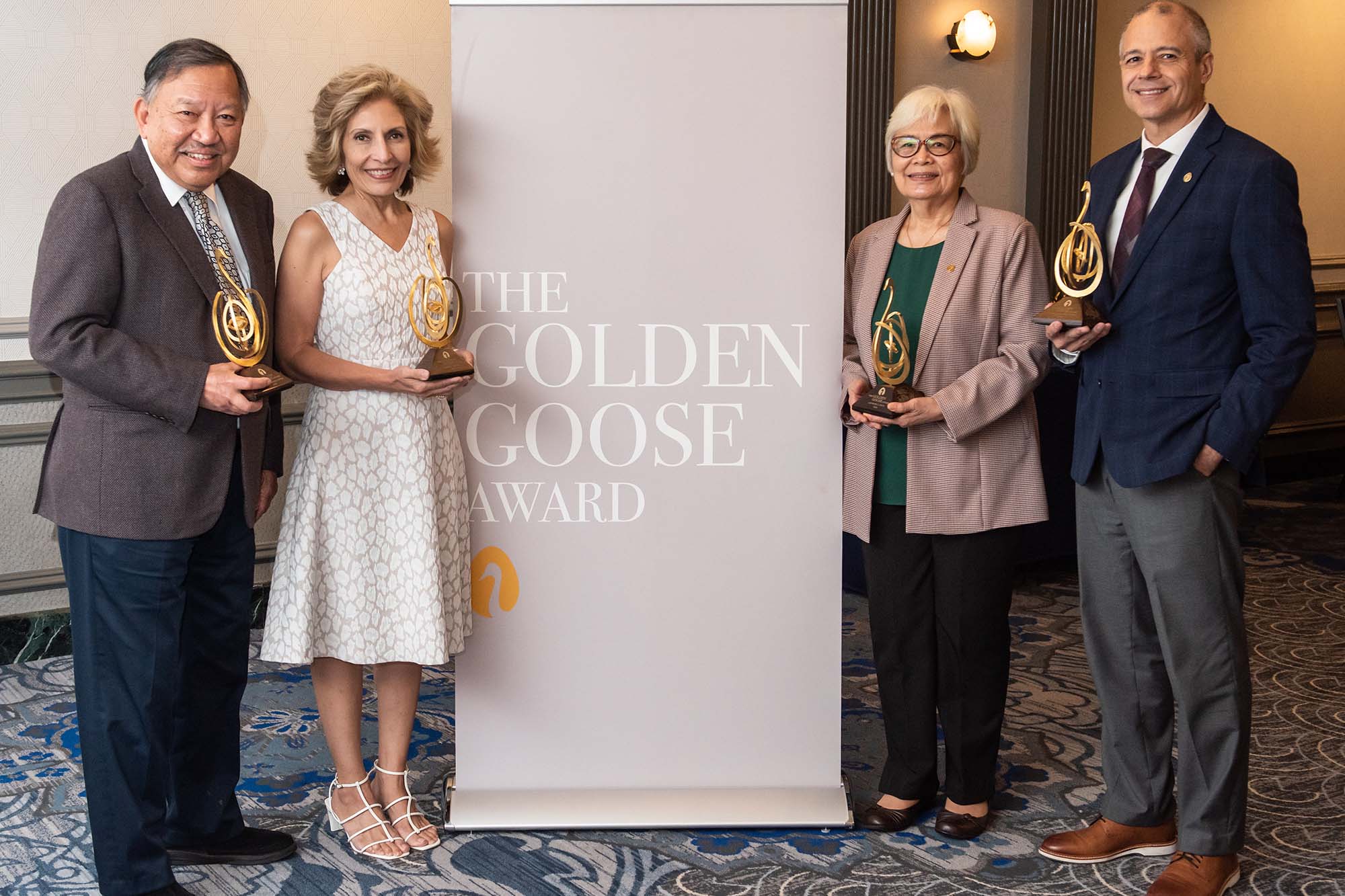 These scientific breakthroughs led to the development of a bladeless LASIK procedure, paper microscopes, and the discovery of a non-opioid pain reliever hidden in the venom of cone snails

The third and final award is given for discoveries made by a team that included SBS’s Baldomero “Toto” Olivera and Michael McIntosh along with their colleagues  Craig T. Clark (in memoriam) and Lourdes J. Cruz (University of the Philippines)

The Golden Goose Award spotlights scientific research that may have appeared obscure, sounded funny, or for which the results were unforeseen at the outset but ultimately, and often serendipitously, led to breakthroughs. This year, the award comes on the heels of the U.S. Congress passing and President Biden signing the bipartisan and historic CHIPS and Science Act. This new law reauthorizes key federal agencies whose projects will propel discovery, build on our strengths, and show what American investment, intellect, ingenuity and risk-taking can accomplish — precisely the type of innovation the Golden Goose Award honors.

“The Golden Goose Award reminds us that potential discoveries could be hidden in every corner and illustrates the benefits of investing in basic research to propel innovation,” said Sudip S. Parikh, chief executive officer at AAAS and executive publisher of the Science family of journals. “AAAS is honored to elevate this important work since the award’s inception, and we thank Representative Cooper for his tireless leadership and dedicated support to this award and the scientific community.”

U.S. Representative Jim Cooper (D-TN), often referred to as “Father Goose,” will retire from Congress at the end of this term. He conceived of the award as a strong counterpoint to criticisms of basic research as wasteful federal spending, such as the late Sen. William Proxmire’s (D-WI) Golden Fleece Award, leading to a coalition of business, university, and scientific organizations establishing the award in 2012. Thanks to his legacy, the award will continue to elevate the importance of recognizing basic science that ultimately improves people’s quality of life.

“It has been an honor to watch the Golden Goose Award grow over the past decade, while highlighting the stories of incredible scientists and innovators in a range of fields. Remarkable scientific discoveries – and the people behind them – are as important as ever. Congratulations to this year’s awardees,” said Cooper.

This year’s awardees are:

Nearly 30 years ago, a graduate student at the University of Michigan’s Center for Ultrafast Optical Science (CUOS) experienced an accidental laser injury to his eye. Fortunately, his vision was not severely affected. However, the observation of the very precise and perfectly circular damage produced by the laser led to a collaboration. Eight years later, that group of researchers developed of a bladeless approach to corrective eye surgery. The new procedure, also known as bladeless LASIK, uses a femtosecond laser rather than a precision scalpel cut into the human cornea before it is reshaped to improve the patient’s vision.

While researching in remote areas of India and Thailand, a technical challenge piqued Manu Prakash’s curiosity. In certain areas of the world, transport, training, and maintenance barriers can make state-of-the-art microscopes inaccessible. Prakash found a potential solution in a decidedly un-technical material: paper. Using principles of origami applied to printer paper, matchboxes, and file folders, Prakash and graduate student Jim Cybulski designed a paper microscope known as the Foldscope that can achieve powerful magnification with materials that cost less than $1 to manufacture. Today, just over a decade later, two million Foldscopes have been distributed in over 160 countries and have been used to diagnose infectious diseases, diagnose new species, and identify fake drugs, among many other applications. The College of Science and SBS were thrilled to host Prakash at the Frontiers of Science lecture series. You can watch a video recording of it here. The Foldscoope has since been a handed out broadly by the College and U Biology as SWAG. 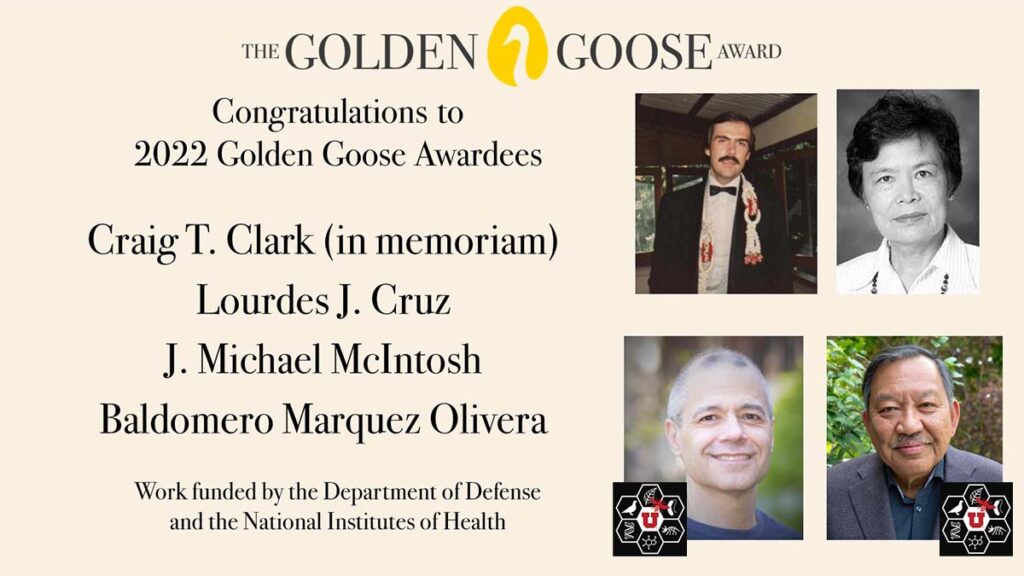 Impeded by supply chain issues while conducting DNA research in the Philippines, Lourdes Cruz and Baldomero Olivera began examining cone snails, a group of highly venomous sea mollusks which happened to be in abundant supply along the country’s coastal waters. Several decades and countless airline miles later, and with the help of then-undergraduate students Craig Clark and Michael McIntosh, the team discovered the raw material for a non-opioid pain reliever and a powerful new tool for studying the central nervous system, all hidden in the cone snail’s potent venom.

The Golden Goose Award is pleased to welcome several new sponsors this year, including Wiley, a global publishing company supporting researchers to communicate discoveries that make a difference, and Google.

The SBS community gathered in the afternoon of Sept. 14 on campus to witness together the festivities from Washington via Livestream.

Read more about the Olivera lab’s work and its recent capture of the 2022 Golden Goose Award here.