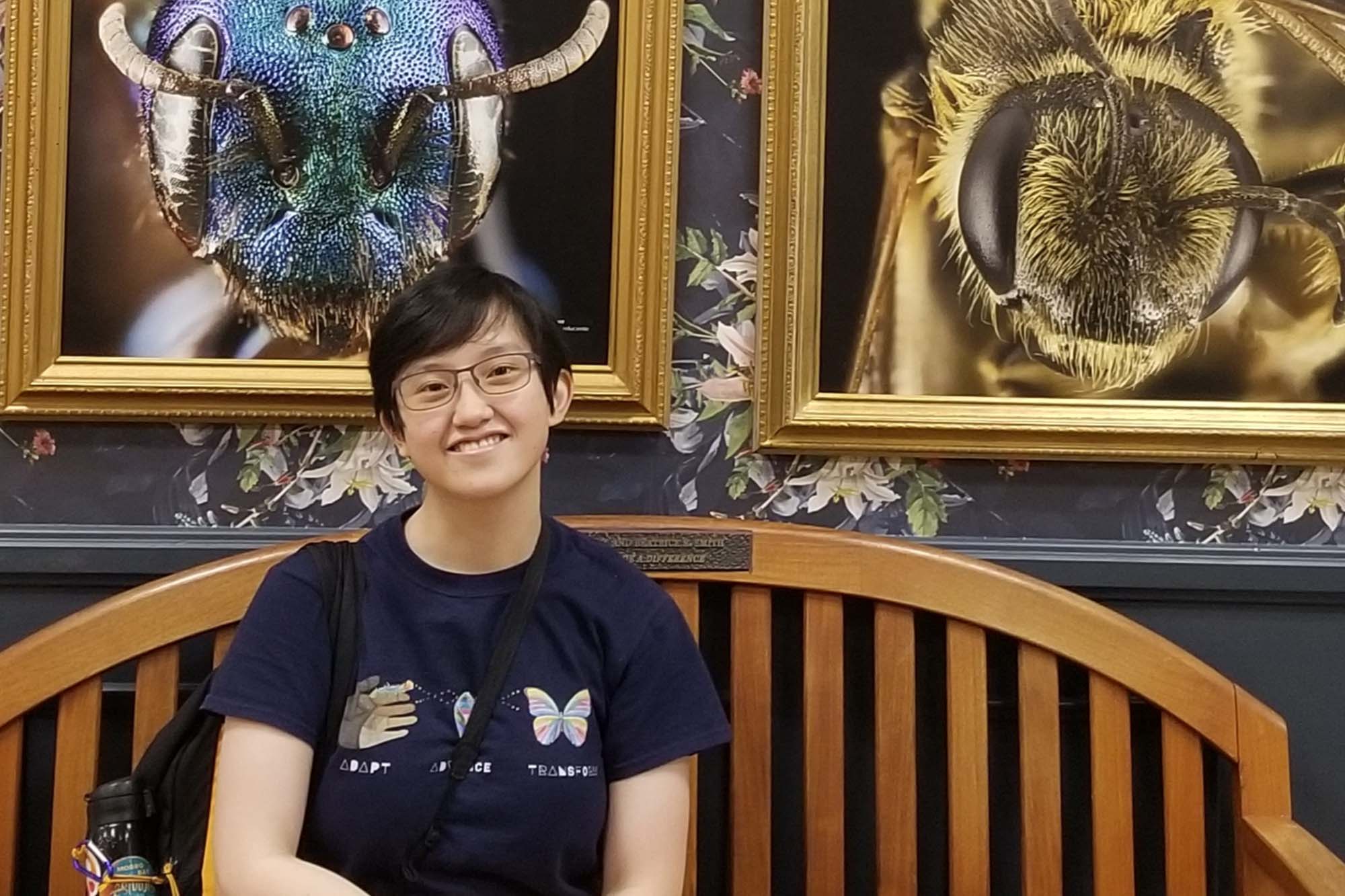 The difference between the flora and fauna of Malaysia and that of the Great Basin and Wasatch Mountains could not be more different. And yet it was the latter where SBS graduate student Elaine Tan (they/them), whose family is from the former, decided to do their graduate work in ecology and the evolution of social insects such as ants.

Following their undergraduate degree from Santa Barbara, California in Ecology and Evolution, focusing on insect and bird ecology, Tan arrived in Utah as a graduate student. Now they are returning to the home of her ancestral family for further training, arguably a satisfying if indirect way to bring her experience full circle. “My parents are from peninsular Malaysia [also known as West Malaysia which occupies the southern half of the Malay Peninsula in Southeast Asia], and I have visited several times.”

Though Tan actually grew up in Los Angeles, they regularly visited Malaysia as a youth which brought into sharp relief the diversity of life forms. Now entering their third year as a PhD candidate in the Longino Lab, and having been immersed in high-desert ecologies, they are now hoping to gain insight into the diversity, evolutionary lineage, and ecology of the entomofauna [the insects of an environment or region] of the Asian tropics.

For this reason, as of August 1, they’re in Vietnam with principal investigator of her lab, John “Jack” Longino, participating in The Ant Course, a two-week research experience in which Tan will network with ant specialists (and specialists-in-training like theirself) from around the world, and where they will secure some skills in tropical field research.

“Currently,” they explain, “I am a research assistant in generating phylogenomic data to fill in the evolutionary tree of ants from across the globe … I am also working on my own research project on behavioral ecology and morphology of wood ants local to the Wasatch Mountains here in Utah.” That evolutionary tree of ants is part of the National Science Foundation-fund Ants of the World project, of which Ant Course is just one component.

Just how different is the biodiversity in Southeast Asia compared to the American southwest’s?
“In the U.S. cities I’ve been to,” says Tan, “I’ll usually see pigeons, doves, rats, and squirrels, with predators such as hawks, coyotes, and foxes doing well feeding on these urban animals. People enjoy feeding squirrels. Gardens in the cities attract buzzing hummingbirds, bees, and hawk-moths.” In contrast, Malaysian cities, she says, feature “pigeons and rats for sure, but the doves come in different colors like pastel green or blue. There are also monkeys that people stop by the roadside to feed. At tourist spots, some monkeys are bold enough to steal food from your hands or [your] bags when you pass them.”
But it’s not just mammals that are strikingly novel in a tropical clime. “Instead of hummingbirds, there are curve-billed sunbirds and flowerpeckers hopping from flower to flower. We get silent lizards in our yard[s]; they [Malaysians] get squeaky geckos crawling into [their] houses. Mosquitos are ever-present, and it takes time before you get used to them while they get used to you. I’m excited to learn more about what’s around this time … [while in] Vietnam.
The group of 36, which includes Tan and Longino, will be stationed in  Cúc Phương National Park, just south of Hanoi. Says Longino, “I’m really looking forward to meeting this new group of students, interacting with Asian colleagues, and experiencing first-hand the ant fauna of Southeast Asia.” It’s all part of Ants of the World Project’s attempt to survey nearly all ant genera and just under half the described species using advanced genome reduction techniques. The result will be a comprehensive evolutionary tree of ants, out to the smallest branch tips.
For Tan, scientific research–whether it’s identifying new species of ants or determining the genetics of social behavior–is just one piston in a two-piston engine. The other is successfully communicating science to others, including the general public. As an undergraduate they earned a minor in professional writing, requiring that they take several courses on journalistic and scientific writing practices. “I also interned to manage social media accounts and blog posts for scientific organizations affiliated with my undergraduate university,” they say. “Translating scientific concepts into easily digestible social media posts is one way to engage the general public, and I find that sharing cool facts about the creatures I am interested in often inspires more interest. Since I study behavior of social insects, people are often intrigued by my slightly anthropomorphized accounts of how ant individuals and colonies interact with each other during outreach events.” Leveraging their skills as a “SCI-COMer,” Longino has deputized Tan to run the lab’s Twitter account, @LonginoAntLab. Along with the work of a University of Utah communications intern traveling with them in Vietnam, you can follow the adventures of The Ant Course and its umbrella initiative Ants of the World Project at @AntsProject.
For Tan, communications is valuable to them, professionally and more broadly. “Being active on social media helps me stay up-to-date on new developments in my field of research, including topics like the genetics underlying behavior.” The Ant Course is therefore a perfect marriage between the deep-dive of research and her impulse for outreach; for building bridges to the public and propelling their own professional ambitions.
By David Pace