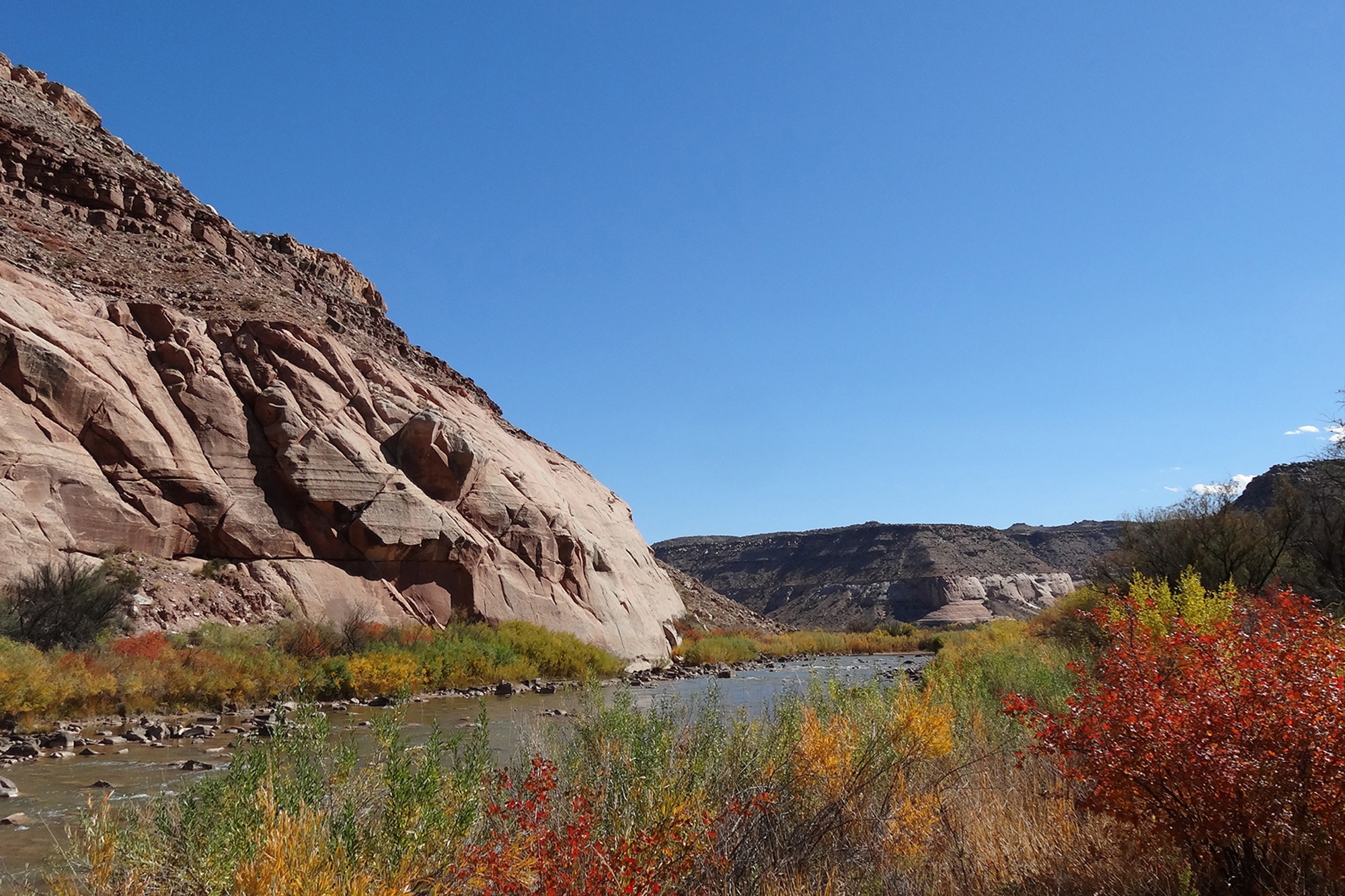 In a dry year in the West, when the world turns crispy and cracked, rivers and streams with their green, lush banks become a lifesaving yet limited resource.

New research from the University of Utah and the Utah Division of Wildlife Resources (UDWR) finds that in dry years, birds funnel into the relative greenness of riparian (adjacent to river) environments. That increased diversity is accompanied by overcrowding that may cause increased competition for habitat and resources, the study finds, and an overall decrease in populations of birds who call the river home.

“In a changing climate, it is critical to understand how birds and other organisms are responding,” says recent SBS graduate Monte Neate-Clegg, PhD’21, and now postdoctoral scholar at the University of California, Los Angeles. “From a conservation standpoint, the results are troublesome.”

“Riparian birds are reporting in on Utah’s most important habitat, the health of our riparian systems,” says Russell Norvell, Avian Conservation Program Coordinator for the UDWR. “We all know how crucially important water is in the West for human populations and everything else.”

The study is published in Animal Conservation.

The story of the study starts in the early ‘90s when UDWR and federal partners began monitoring bird populations in riparian areas in response to widespread concerns that riparian birds might be in trouble. At first, UDWR staff would go to a set location, stay for a set length of time, and record all the birds that they saw or heard during that time. The data generated from this method are called “point counts.”

In 1994, the program also began banding birds. In this method, a fine, nearly invisible net (called a “mist net”) is stretched across a flightpath, temporarily capturing small birds. Staff and volunteers carefully remove the birds from the nets, attach a small, light aluminum band etched with a unique number, and safely release the birds back into the wild. In such an effort, researchers repeat the mist netting at the same place many times and hope that they’ll find some banded birds in the nets in the future, allowing them to track the longevity of individual birds and then estimate the size and health of the population.

Norvell’s first job with UDWR was as a seasonal bird technician in 1995. He says he’s traveled to all 14 monitoring sites throughout Utah, which were randomly located along streams.

“These are some of the most beautiful places in an already beautiful state,” he says of these areas that are cool and moist during the summer and home to a diversity of birds. “The bird life is tremendous. It can be a cacophonous sound and a little daunting if you’re trying to count them all. First you’re trying to identify individual species, then how many individuals of each species and finally their position – all while these birds are flying around. You’ve gotta be on your game, for sure, to collect these data.”

But state and federal budget cuts in 2010, during the Great Recession, meant that after more than a decade of monitoring, Norvell had to close the riparian bird monitoring program. The associated reduction in staff meant that the valuable data collected over nearly two decades languished, largely unexamined.

Then in 2016, Neate-Clegg began his doctoral studies at the U, and spent time banding migrating birds at the U’s Rio Mesa research station in southern Utah, which includes a stretch of the Dolores River.

“It became apparent how important these rivers and riparian habitats were for migratory birds within the harsh desert landscape,” he says.

Neate-Clegg and his colleagues noticed that during particularly dry years they were finding more birds than usual in the mist nets near rivers. They wanted to explore whether that trend held over multiple years, so they turned to the UDWR’s bird monitoring dataset, analyzing data from eight bird banding sites between 1994-2008.

“Studying the effects of climate change is always tricky as it usually requires long-term monitoring data which can be hard to come by,” Neate-Clegg says. “Luckily, we were able to take advantage of the dataset compiled by the UDWR. Monitoring stations need not focus only on climate change; many things change over time, so these data can be used to answer many questions.”

The researchers first sought to understand how bird populations were changing over time using measures including the number of species and abundance of individuals within each species at any point in time.

Then, using bird banding data and the capture histories of individual birds the researchers estimated how long birds were living, how many birds were joining the population, and how the population was changing in size. They then related these ecological measures to climatic variables including temperature, precipitation and “greenness,” measured by satellites as a measure of wavelengths reflected from the ground, which identify actively growing plants.

The multi-year data showed that total bird captures and total species were higher in hotter and drier years, El Niño years, and less green years. The effect was strongest for non-riparian species, suggesting that in harsh conditions, birds from all over the landscape found their way to the rivers.

“This suggests that the wider landscape is unable to support migrants and so they are forced to use greener areas,” Neate-Clegg says.

But just as an influx of tourists can crowd out locals, the uptick in birds may have taken its toll on typically riparian species, especially those that breed on river banks. In warmer years, population growth rates slowed for 47% of riparian bird species. The slowing, the researchers found, wasn’t due to more birds deaths, but rather to fewer new birds joining the population.

There could be several reasons that bird breeding goes down in hotter years, but the authors suspect that more species in riparian habitats can mean more competition and fewer resources to go around.

“This study shows how native bird populations utilize these habitats,” Norvell says. “As droughts intensify, this becomes increasingly the refuge that everything’s relying on. And I don’t think humans are all that different in this case. We’re all increasingly relying on these very same areas.”

Neate-Clegg says that rivers provide connections for birds across the landscape, enabling them to transport nutrients or disperse seeds. A hotter, drier climate could affect those important functions that birds provide, called “ecosystem services.”

“If you’re a bird watcher in Utah, the prospect of more diverse birds in riparian areas might sound exciting!” he says. “But it’s a sign of general stress across the landscape, and you may start seeing fewer local species.”

Neate-Clegg says that in addition to climate change, which is a global issue requiring global action, cattle grazing and water use are two issues specific to the West that are affecting river habitats.

“Overgrazing can damage vegetation along rivers and increase nutrient load which affects water quality, he says. “The damming of rivers and use of water for irrigation have detrimental effects on stream flow which in turn affects biodiversity. Mitigating these issues to build healthier riparian habitat would mean increased stability and resilience in the face of climate change.”

Norvell says that the DWR is actively working to restore riparian habitats through Utah’s Watershed Restoration Initiative, a partnership between state and federal agencies that has completed more than 2,400 restoration projects, with 258 ongoing.

“With these data, we’ve helped focus the lens of that effort on these important habitats,” he says.

The agency has also shifted its bird monitoring program to all habitats throughout the state, recognizing the importance and interconnectedness of bird populations.  “It’s an outgrowth of the value we saw from the riparian data,” Norvell says. “We’ve been able to convince partners like the Bureau of Land Management, the United States Forest Service, the Department of Defense and several NGOs to expand this idea into a collaborative all habitat, all bird approach.”