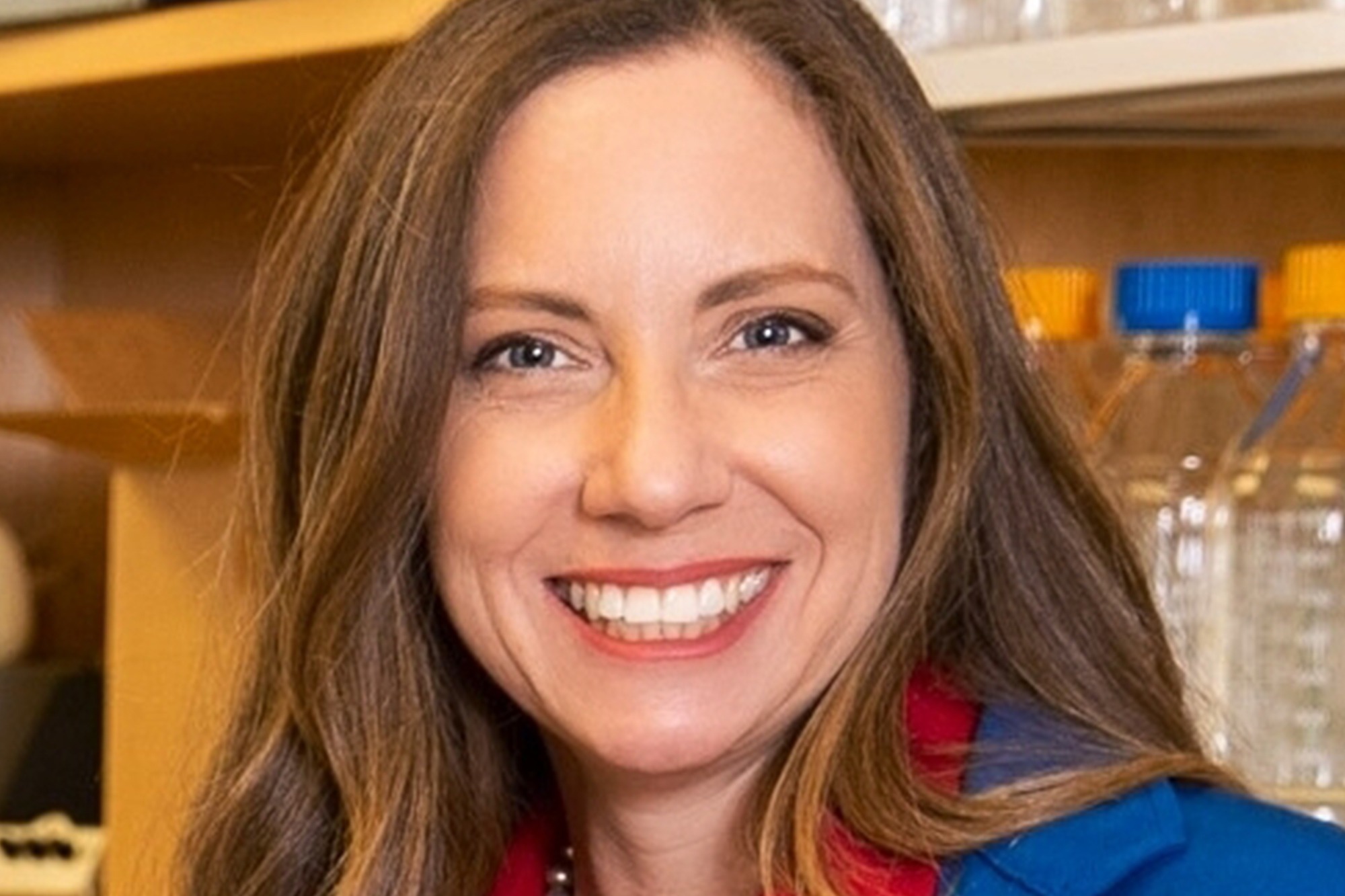 For Kathleen Treseder, HBS’94, the launching pad for her career in science and research was Borneo, the giant, rugged island in Southeast Asia’s Malay Archipelago.

A Salt Lake City native and a first-generation college graduate, she didn’t know that Universities did research. When it came time to apply for a president’s scholarship at the University of Utah, part of the application process was to have lunch with someone, a faculty member, she recalls, “so you could ask them questions about the U. ‘What kind of professor do you want?’ I was asked. I liked science, so I just said biology.” She was then paired with John Roth, biology faculty member and, at the time, the chair of the department. (He is currently SBS professor emeritus.)

Roth invited her to work in his lab that summer before she enrolled. “I accepted,” she says. “I went to work in his lab. And ever since then I’ve been doing research.” It turned out that Roth was studying the genetics of Salmonella. “I couldn’t get into that. We had to mouth pipette which is inadvisable,” she says referring to the practice of using one’s mouth to suck a desired volume of a medical laboratory specimen into an open-ended tube. “It was a tube with liquid media … a cloudy, big broth of salmonella.” She switched to Dinah Davidson’s lab which was studying tropical forests. “Not as virulent,” Treseder says with a laugh.

During this time Treseder took a plant ecology class from SBS’s Jim Ehleringer who would later chair the department as well. On a field trip together he asked her, if she wanted to go to graduate school. “You’ll need field experience,” he said. “Is there a field site you can go to? Borneo?” He told her to ask Davidson.

“So I prepared a whole speech on why I wanted to go,” says Treseder, thinking she was going to need to sell herself, “and I didn’t have a chance to say it to her.” Davidson, who is now an SBS professor emerita, just signed her up right out of the gate.

It was the first time Treseder had traveled by herself and away from the University, and it proved to be transformative for her. “It was a series of change encounters. Without Borneo my life would have looked much different.” It was the work she did there that ended up in her honors thesis which in turn was published in the prestigious journal Nature.

Not at all bad for an undergraduate researcher.

After the U, Treseder went on to earn her PhD at Stanford in 1999 and worked as a postdoctoral fellow at the University of Pennsylvania where she was awarded the Charles Ludwig Distinguished Teaching Award in 2003. She then landed a professorship at University of California, Irvine where she was recipient of the Chancellor’s Award for Excellence in Fostering Undergraduate Research in 2005, followed by a stint as department chair. Currently, she is he Howard A. Schneiderman Endowed Chair.

Throughout her career, she has never gotten very far from that first impetus to do research at the School of Biological Sciences. Today she and her lab address the role of fungi in mediating ecosystem responses to global change. “Our overarching goal is to improve predictions of future trajectories of global change,” she says, “by incorporating feedbacks governed by fungi.”

When most of us think of fungi, mushrooms often leap to mind. But fungi are everywhere, and whole phyla of them are still being discovered. She started studying other kinds of fungi during grad school. (“I had to learn all that, on the fly.”) She was also quick to learn that her subject matter is largely invisible to the naked eye. Ninety percent of the biomass of fungi is micro-scale, making them underground, unseen and invisible players in the world. “Every once in a while, fungi will make mushrooms,” she says, which is like the “apple of a tree.”

In terms of climate, and climate change, fungi are real players, and the Treseder lab focuses on their production and storage of carbon (CO2) to corroborate that. For example, yeast is fungi and produces the bubble in beer as a by-product of its lifestyle. Yeast breaks down dead material and uses it for energy, releasing CO2 as a by-product. It turns out that fungi release ten times the amount of CO2 than humans do. “That means if fungi change [there’s] major ecological change,” she says. But because this happens at a microscopic level it’s been very hard to study.

Treseder finds comparing fungi with trees as a helpful analogue. “When trees build wood, carbon is incorporated. It takes a long time to decompose,” she explains. “It’s a smaller scale in fungi. Some of the material they make can be almost woody. The cell wall is tough to decompose. The cell walls stay in the soil, microscopically.”

When you look at rich, dark, soil, you are seeing a lot of carbon most of which is from fungi or bacteria that have died. “It adds up to a lot,” she says. There’s “twice as much carbon in the soil as in the atmosphere, and much of that is in [fungi].”

For fieldwork Treseder chooses ecosystems that are in danger from fires–for example, coastal sage scrub, only five percent of which is intact–and how fungi respond to depletion. She has also studied cloud forests in Costa Rica as well as boreal forests in Alaska that are warming faster than others. Are these big changes in carbon in various sites due to fungi? Very possibly.

“The neat thing about it is that my lab picks each independent research; they pick the study site best for their system. Across my lab we are studying many ecosystems. The problem is so global that I don’t want to focus on one.”

The role the ubiquitous fungi plays in climate change is so paradoxical, so mind-bending and so large that it requires a massive database. While the research is continually thinking on the molecular level and the individual bonds that are breaking down, it is ultimately concerned with how much CO2 is going up in the atmosphere globally. We are always, “taking the research to a new level: trying to put the research into our lab and into a broader context. Whatever we find in our lab, I want to know, is this something that occurs broadly?”

The best way to approach this problem is to construct databases with all the research around the globe and to incorporate them into computer simulations of the earth’s climate called Earth System Models. The models include everything we know about how climate behaves, Treseder says, attempting to answer questions such as, What if the fungi reduces the Co2 by this amount? How will that affect the climate?

“It all relies on hands-on work on the ecosystem by lab teams,” says Treseder. In addition to testing foundational ideas about fungal ecology, the team is also looking into whether fungi that adapt to more stressful environments in turn lose their ability to grow well under favorable conditions.

In all, the research elicits consequences for biogeochemical functions at the global scale. In particular it’s designed “to move soil fungal ecology past the discovery phase” and “to improve predictions of CO2 cycling in ecosystems.” In turn their findings will inform the entire country as it prepares for future droughts, wildfires, heat waves, and other environmental changes.

Tying a subject model and its functions as large, diffuse and, frankly, invisible as fungi, requires more than just stellar and precise scientific measurements. “We can’t do it alone,” says Treseder, referring to team-based science and the increasingly collaborative nature of the field of ecology. For her group, researchers collaborate not just by chance but intentionally, even going so far at UCI as to hire an official “team scientist” who helps them use evidence-based practices to get work done. Mixing sociology with science, these professionals are actually licensed marital counselors. In this way team science is a science.

While Treseder’s research journey since graduating from the U has been involving, it hasn’t been so absorbing and demanding as to exclude other ambitions. It has, however, informed her other interests which includes ecological policy and removing barriers for women in science. When the pandemic hit in early 2020, she says, “you could really tell which cities and towns embraced the science and which did not.” She has worked with grass roots teams in Orange County to transfer each of its towns and cities to renewable energy. “Local officials can really change your life and they need access to science.”

It was extension of this activism that led her to declare her own candidacy earlier this year for Irvine City Council on a green platform. Her ultimate goal? Get all of Orange County, the sixth largest in the U.S., moved entirely to renewable energy. The election is in 2022.

This trifecta of research, activism and politics is, of course, all informed by Kathleen Treseder’s identity as a biologist that germinated at the University of Utah and threaded through her transformative time in Borneo years ago.

Today she is kept even busier with two thirteen-years olds starting middle school on Zoom . . . still. The Covid-19 outbreak has also impacted her work as a professor. “One of the hardest things [due to the pandemic] was to teach a field class,” she admits, “developing it at the time students were moving back home event to other countries like China. We couldn’t bring them in and had to transition to field trips wherever they were.”

To meet the challenge, she found useful tools like iNaturalist, an app which once you take a picture of an organism identifies the species in the ecosystem that the specimen is in. The best thing for creativity is having tough constraints on you, she says. “Students enjoyed it; visited a park, out back of their house.”

And while the lab shutdown for half a year, fortunately, fungi are everywhere.