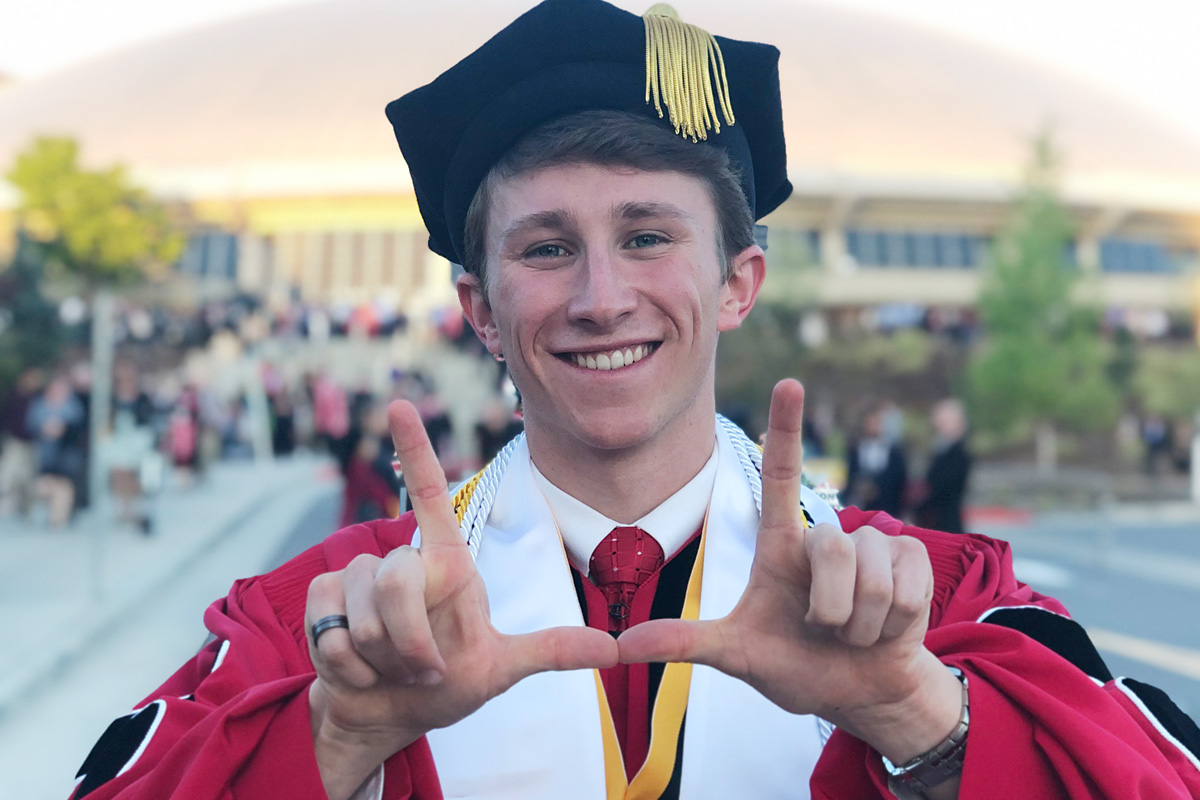 What does a former Student Body President and Biology alum do after graduating from the U? You start by moving to New Hampshire as a boots-on-the-ground organizer for a presidential candidate.Connor Morgan (BS,2019) has hung up his cap and gown, and his sojourn at the office of the Associated Students of the University of Utah where he served as president to join candidate and former U.S. Naval Reserve officer Pete Buttigieg, the young mayor of South Bend, IN. Buttigieg, the nation’s first openly gay presidential candidate for a major party, is seeking the Democratic nomination and Morgan is there to help him win the race. 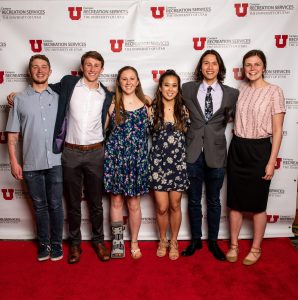 “Right now,” says Morgan, “we’re trying to build relationships with those on our turf, recruiting volunteers who support the mayor and training them on how to recruit their own teams of volunteers.” He says he’s not super excited for the New England winter coming up when there will be more door-to-door canvassing in one of the first states where these sorts of outings either get “legs” or don’t. “But I guess, it’s not too much worse than Utah’s.”

Earlier, at the College of Science convocation and commencement, the double-major (biology and political science) baccalaureate says his face was hurting from smiling so much as he assisted in handing out diplomas and shaking thousands of hands. “But I had a great time.”

While he loved ninety-five percent of the job being student body president, he says he’s now “happy to pass on that other five percent of the job. I’m guessing it will be one of the best jobs I’ve ever had working with student leaders, administrators, faculties, in a collaborative approach with many partners around the U.” One of his ambitions during his own 2018 campaign to represent 32,000 students was to move beyond just developing programs and events, but to have his executive team work internally to create a culture of student advocacy.

“I think student government is unique among other student organizations,” he says. “It was incumbent upon us to advocate on behalf of the student body.”  Through this lens, a movie night became a partnership with the resource office at the Student Union among other collaborations that leveraged the full plate of University offerings. 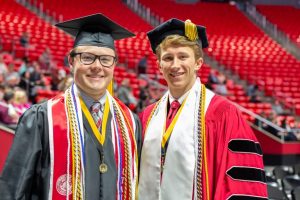 Morgan also worked to have full participation with the University senators, one each from the colleges and the academic advising center. One of the legacy policies that he and his team led was a push to work more closely with the sustainability and facilities team to recommit to the climate commitment initially made by the University at the end of 2008. The goal? For the University of Utah to be a carbon-neutral campus by 2050 if not by 2032 which is the city of Salt Lake’s target. Before leaving office, Morgan helped set up a task force to reassess the way forward, including the money, infrastructure, energy sources, and sustainable living practices to be folded into the curriculum.

Another related initiative, certainly helped by the nation’s raucous and controversial 2016 presidential election, was to increase the vote in the university community. Under his leadership, campus voting booths increased from six in 2016 to twenty during the most recent mid-terms. “Students are more engaged than they have been in recent memory,” he says. “[Many have felt] disenfranchised and not particularly infatuated with the way things are going–more the [general] direction of things, [than just political] parties. They are eager to do something [about it].”

From the beginning campus safety was a priority for Morgan, so it was deeply ironic that just weeks into fall semester, Lauren McCluskey, a college track star, was murdered on campus by a former acquaintance. Morgan recalls that the days following October 23rd were some of the most formative for him, days that were deeply traumatic. “I didn’t know Lauren personally, and I don’t want to appropriate from her friends, but it was very hard to balance being a twenty-one year-old college student myself with doing my part  to console the student body.”

Morgan visited with McCluskey’s friends, helped plan and then attended the vigil. The October 24th event, he says, was “a really good coping mechanism, especially for student athletes.” The biggest lesson from the tragic ordeal for Morgan was when University trustees expressed their gratitude to him for doing his part. “I thought, ‘Why gratitude for showing up?’ The most important things for a leader to do is not to give a speech or to have the best policy ideas, but to show up. I didn’t know that.” He does now, which triggered new policies and a statement embedded in the ubiquitous class syllabi that looks at campus safety through the lens of interpersonal violence. 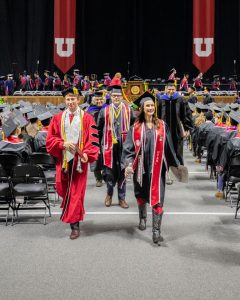 There are a lot of things that this twenty-two year old U alumnus now knows, and much of it has been shaped by his generation. “We are very different from our parents,” he muses. “In some sense we have more opportunities like having the breadth of the world’s knowledge at our fingertips; the boom in tech and service jobs, for those who are educated enough in these areas; increasing standard of living for many sectors in our generation. But at the same time in some ways we are more limited [by the] challenges.”

He gives the example that for millennials the country has always been at war. “Most of our adult lives have been dealing with the economic shock of 2008/9. We’ve had a much harder time getting first jobs that can provide for the cost of living, to buy a house. We are the first generation that is expected to have a lower life expectancy and make less money than our parents.”

And then there are the political, social and environmental challenges. “The onus on us is to solve problems through science and [by being] civically engaged.” In important ways, he continues, the democratic process isn’t working for his generation and the ones just ahead of his. “An especially prominent concern with many of the people I grew up with … is that we’ve been in a highly educated bubble: the real world isn’t that bubble.”

As a biology graduate, he is deeply concerned about ignorance over science and the scientific method, but “active distrust of science. In the past science has been labeled elitist, [but] now [it’s] being considered by some as ‘fake news.’” While he believes society should heed scientific findings, particularly local and global environmental degradation, it is the job of the new generation to better communicate that science to the public. “Yes, peer reviewed communications are critical,” he says, “but equally if not more important is to share those findings with the public.” Morgan had a great model for outreach and working against what he calls the “science deficit model of communication” from Biology professor Nalini Nadkarni. A forest ecologist, Nadkarni knows from working with populations that range from church-goers to the incarcerated that people don’t like to be lectured to. Instead, her model is to engage and integrate communities, with a two-way collaborative, relational and approachable way of sharing data and experiences.

“The everyday person when they hear that ninety-nine percent of scientists believe in [human-induced] global change … will agree [with them].  The first time I took a step back on how people engage with science it was through rose-colored glasses as a sophomore. I thought that everybody believed in science. That wasn’t true. What are some of the issues are in science communication and how we can bridge some of those gaps?”

As a recent graduate, Morgan’s advice to his fellow Utes is to take advantage of the resources the University of Utah offers. For him being a member of the UtahSwimming and Diving Club helped hi find his passion. “Do academics,” he advises, “but remember college is about much more than that.” Aside from being a great de-stresser, the back-stroker (with a little freestyle and individual medley thrown in) says that clubs also provide an “incredible network of friends” to move forward in life.

Headed eventually for law school, a “couple of years from now,” Morgan hopes that with his background in biology he will be “a scientifically informed policy maker,” whether as an officer in a federal department, or working at the local or state level. A run for public office is a possibility. Currently, being in the petri dish of a presidential campaign in the early weeks of a run for a major party nomination will most likely help him make that decision. Speaking as the public servant that he seems destined to be, he remarks that wherever he ends up he “hopes to be able to do whatever is most needed to be useful.”