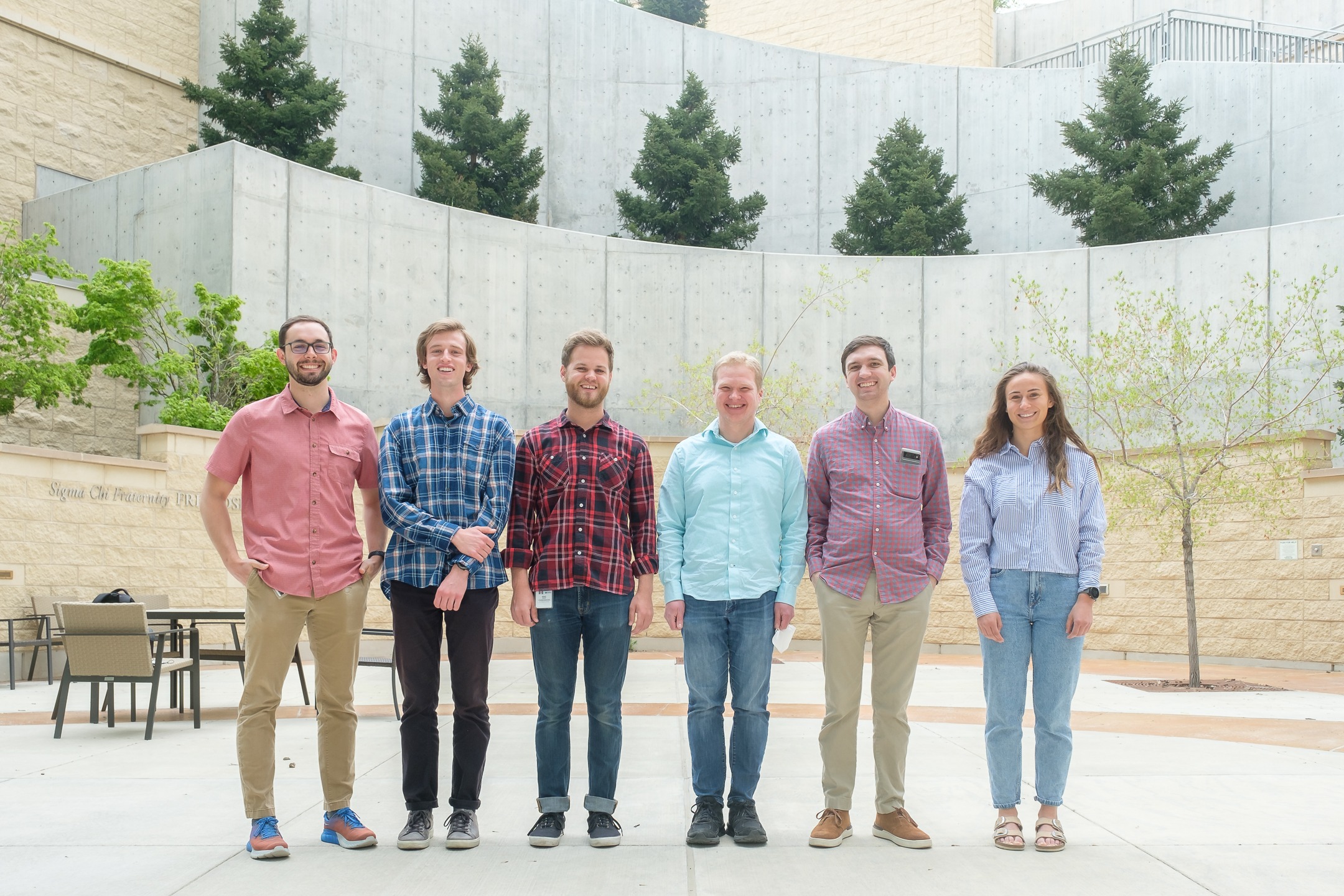 A cracker jack team of U of U undergrads works with principal investigator Ben Myers to break open a decades-old biological mystery.

Corvin Arveseth, BS’21, can’t remember when he wasn’t fascinated by science and biology. So, when he came to the University of Utah and declared his majors in biology and biochemistry, he knew he wanted hands-on experience in research. “I didn’t know anything [about the] Hedgehog (Hh) signaling [pathway] until I read an advertisement put out by Ben Myers, [principal investigator at Huntsman Cancer Institute and assistant professor of oncological sciences at the University of Utah] in a biology department newsletter looking for undergraduate researchers,” he says. “After reading some background information and meeting with Ben about the Hh pathway, I became intrigued with the work being done in his lab.”

The Hh pathway he’s referring to is akin to a master set of instructions for animal development and regeneration. It controls the formation of nearly every organ in the human body. Signaling pathways like Hh serve as molecular “telephone wires” from the cell surface to the nucleus. When cells in our bodies communicate with one another, signals are relayed along these molecular telephone wires, turning on expression of genes involved in growth, differentiation, or in some cases skin and brain cancers.

The Hh pathway got its unusual name from decades-old genetic studies in fruit flies, where mutations in critical developmental genes led the flies to take on a bristly hedgehog-like appearance. However, versions of the Hh pathway operate throughout the animal kingdom, controlling development, stem cell biology, and cancer in many different contexts.

But even after many years of effort by labs all over the world, surprisingly little was known about how the Hh pathway actually works at a molecular level. Scientists knew that the signals conveyed by these molecular telephone wires were fundamental to human development and disease, but they didn’t know what the signals were, or how they were transmitted intracellularly. Consequently, health researchers’ ability to control Hh signaling in many diseases including cancer had been limited.

So, this is a story not just about a seemingly intractable research question, which is de rigeur in scientific circles, but how a team of largely undergraduate students in a four-year-old lab worked together under enormous odds to shake loose that answer. Myers says that that it was because of inexperience, not in spite of it, that the undergraduates in his lab were able to make these discoveries.  These students’ fresh, undaunted determination to scientific inquiry, combined with a lack of preconceived notions and a willingness to learn, were key factors that enabled their groundbreaking discoveries.

Two papers, both with U undergraduates as first or co-first authors, were the gratifying result.

When Myers first set up his lab at the U in 2018, the key molecule in the Hh pathway that grabbed his attention was SMOOTHENED (SMO), a so-called “transmembrane protein” that spans across the cell membrane from the outside to the interior. SMO was known to be critical for transmitting signals from the cell surface to the nucleus. But what were the five or six steps between receiving the message and turning on gene expression? There was a “major disconnection about how this worked,” says Myers.

The twenty-five-year-old mystery was indeed tantalizing. It was “this interesting mystery coupled with the importance of Hh function,” says Arveseth, “in developmental and cancer biology [which] hooked me right away.”

Arveseth was the point of the spear for this project begun at the beginning of his sophomore year. But there were many others on the team, all of whom are “both incredibly smart, and also very kind and a lot of fun to work with,” according to Myers. This includes Nate Iverson, a third year chemistry major with an interest in cellular signaling. “Having HCI in close connection with the University gave me greater access to research possibilities, and I was able to find an opening in the Myers lab studying Hh signal transduction.”

And then there was biology major Isaac Nelson, who worked tirelessly to produce a freezer full of carefully prepared, purified fragments of SMO for biochemical studies, only to hit a brick wall when he and Myers were unable to formulate a good hypothesis to drive an experiment.  “It was only after starting up an international collaboration,” says Myers, “that the critical experiments snapped into view for us.” This led Nelson to send his samples to one of the lab’s new collaborators in Germany, and they used his samples to try an experiment that worked right away. In the midst of a raging pandemic, Nelson’s purified proteins helped to launch a new and entirely unexpected phase of the project, expanding the collaboration to include other scientists around the world.

“It was another scenario,” says Myers, “where everyone worked well together.”

Recent graduate Madison “Madi” Walker, BS’21, with a cell and molecular emphasis, was also part of the team. She is still working in the Myers lab studying another critical aspect of SMO signaling, namely the interaction between SMO and the enzyme G protein-coupled receptor kinase 2. Earlier, former undergraduate Jacob Capener, BS’20, assisted in the work.

Another critical member of the Myers lab team is Will Steiner, BS’21, who is currently collaborating with Arveseth and Nelson to purify SMO in complex with its binding partners in order to work out their atomic structures. He became interested in this area of research after taking the cell biology and biochemistry course at the U. “Biochemistry was particularly compelling and got me excited about the chemical reactions behind human physiology,” he says.

It starts in the classroom

Rigorous courses were critical in preparing Myers’ undergraduate team for the hands-on research that led to their remarkable findings in the lab. He has nothing but kudos for the U’s curriculum. “Coursework before the lab experience [for undergraduate researchers] was very, very good here. In general, I’ve been lucky to attract motivated and curious students to my lab. They are inspired to push the research forward. They are all up to the challenge. And they have a great esprit de corps. They all work incredibly well together as a team to drive the science forward.”

That kind of correlated teamwork was not necessarily easy to enact under the circumstances. “Fortunately, we were able to finish the last key experiment of the first paper,” says Myers, in March 2020, just before the pandemic started to take hold and shut lab work down. He’s always believed that having undergraduates get a taste of cutting-edge research is important. They “shouldn’t have to work on something trivial… . What’s exciting about science is to push the boundaries.”

And yes, for Myers and the other senior members of his lab, including graduate students Danielle Hedeen and Aram Centeno, lab manager Ju-Fen Zhu, and former lab technician John Happ, “you have to be committed to helping everybody in your lab, even if they’re neophytes.” Clearly it’s been worth it.  “And being a little bit of a neophyte is good,” he says, “because you don’t talk yourself out of doing experiments that are simple, unorthodox.”

What Myers is trying to say, and seems to have proven over the course of the past three years and now the publication of two discovery-laden papers, is that their remarkable findings stemmed from the initial naïve view that the SMO protein didn’t fit the mold of other proteins as was previously assumed. He and Arveseth took a guess that SMO might be directly coupled to a critical intracellular signaling molecule called PKA. This was a rather wild idea, since there were few if any examples of transmembrane proteins that directly interacted with PKA. “It was a guess, how it might work, and a couple of months later:  big discovery. Our initial guess was on the right track. There was a whole new unexpected thing going on but that made sense.”

Though early on the team suspected what they had discovered was important, “we didn’t know if we had a full explanation of how the system worked. We weren’t sure if it was the main event or an auxiliary event.” In the first paper, published in the journal PLOS Biology last year, they explained that: what they thought they knew, and what they weren’t sure about . . . yet.

But it was only after the pandemic was in full force that the team pivoted to the second exciting phase of the project, expanding to include Susan Taylor’s lab at the University of California, San Diego, one of the world’s foremost authorities on the PKA molecule the Myers team had implicated in their research.

Taylor and her colleagues had a critical insight regarding the SMO-PKA interaction which eventually formed the basis of a second manuscript, recently published in Nature Structural and Molecular Biology. “It is a truly remarkable and inspiring collaboration that continues to this day, and I am so proud of how everybody was able to join forces and overcome so many obstacles created by the COVID-19 pandemic,” says Myers. And his team is anticipating that even more exciting discoveries are on the horizon. Eventually, this work may lead to better drugs to treat some of the diseases that result from aberrant Hh signaling, including various skin and brain cancers.

In all, with the resulting two papers, the project turned out to be a “best case scenario that wasn’t planned,” and a lesson of how important it is to keep an open mind, which often leads to big discoveries.

Success is never final, however. And Arveseth, recipient of no less than ten scholarships and awards during his sojourn at the U, is now enrolled in the MD/PhD program at the Washington University in St. Louis, where he will focus on hematology and oncology. His colleagues are also pursuing their academic and research careers full-steam ahead. They, along with their mentor, Ben Myers are a testament to the notion that persistence in knowledge gathering pays off but that it must be paired and even driven by a relentlessly open mind.

Concludes Myers, “To be honest, it comes down to the willingness to try new things and to have the ability to work together as a team. In reality, this would have been way too much for any individual scientist, even a highly trained one, to do alone.” You can follow him and his lab on Twitter @Myers_lab

You can support undergraduate research in the School of Biological Sciences by donating to Undergraduate Lab Scholarship fund.
To support cancer-related research activities like Dr. Myers’ and his team, please visit