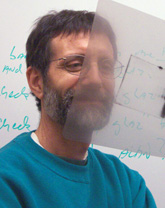 Neuronal regeneration after axotomy has been studied in humans and other vertebrate model systems for over 100 years and yet we still do not have a comprehensive molecular model nor an effective treatment for human diseases caused by neural degeneration. Surprisingly, the powerful genetic model systems used so successfully to study body pattern formation, programmed cell death, neural development and many other important biological problems have not been used to study neuronal regeneration. This is obviously not an oversight by scientists. Rather, it has been difficult to devise a robust screening assay for neural regeneration in either D. melanogaster or C. elegans. In 2006 I, together with Hammarlund, made an observation that now makes it possible to screen for mutations that effect regeneration in C. elegans. We discovered that embryonic neurons lacking �-spectrin develop normally, but after hatching undergo a movement induced axotomy followed by regeneration. This is a robust phenotype, with most axons in each animal breaking and regenerating before the animal reaches adulthood. This well characterized regeneration phenotype in C. elegans mimics the phenotype of mammalian neurons in response to axotomy. My lab is currently using RNAi knockdown to unbiasedly assay the effect of every gene in the worm genome on the process of neuronal regeneration. We have already published the characterization of one signaling pathway we discovered in our screen. The dlk/p38 MAPK pathway is required for axon regeneration, but not normal nervous system development. Over expression of DLK-1 improves axon regeneration and delays the age related decline in regeneration ability. We have identified over 50 other candidate genes in our screen and we continue to characterize their affects on axon regeneration.