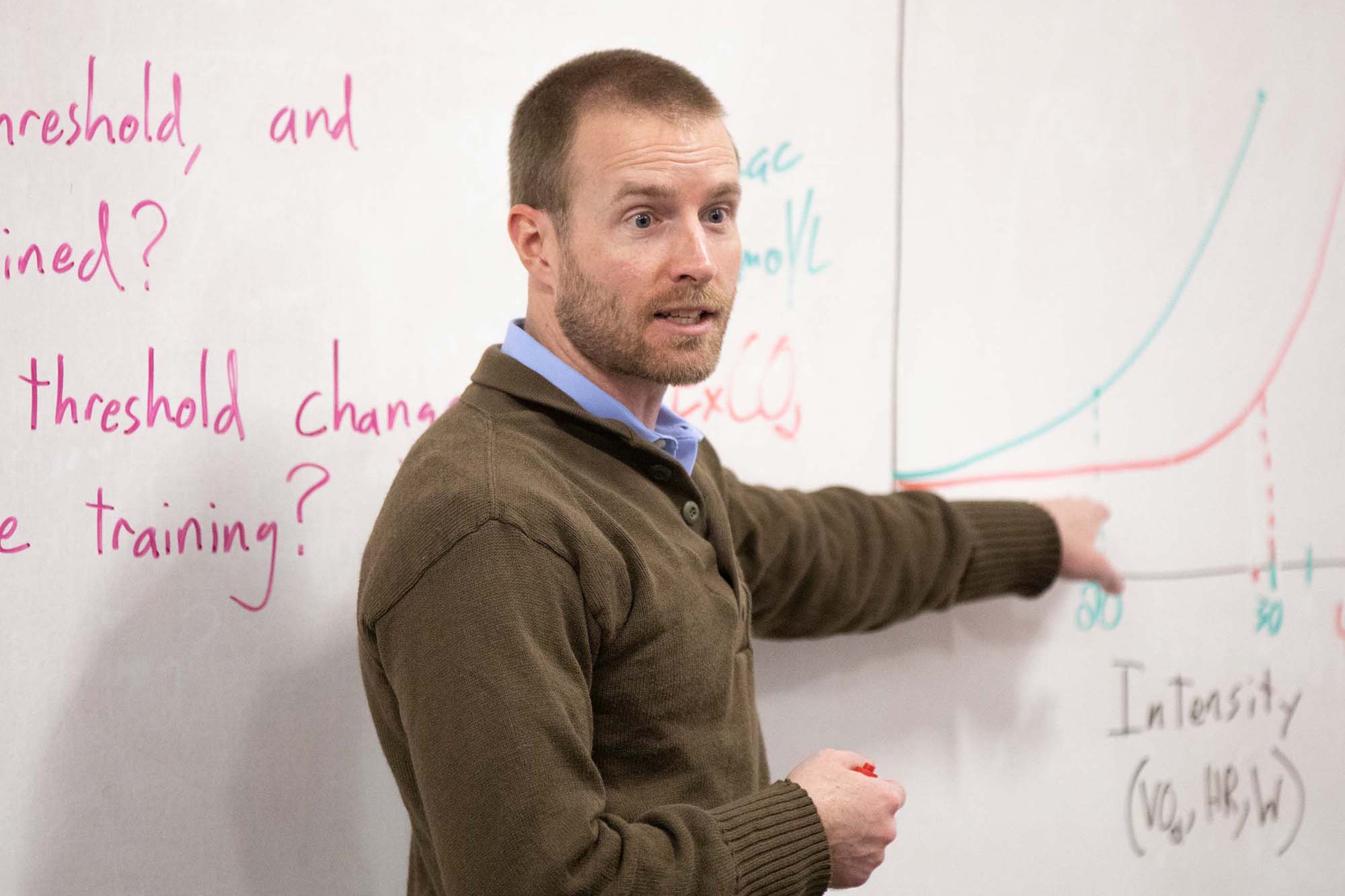 “I took two years off following my bachelor’s in education,” says Jon Groot, PhD. “All I knew was that I wanted to learn more. [I had] no end point in mind. I was just going for what interested me.”

The Salt Lake City native moved to Seattle and spent four months in Asia, including Japan and Tibet. He studied to be an EMT.

That’s when he walked into Mark Nielsen’s anatomy class, almost as a one-off, at the School of Biological Sciences. The unique lecture-followed-by-cadaver-lab experience categorically entranced him. He served as an apprentice TA for one semester, then as a mentor TA for two years, helping to train the apprentices who rotate through lab stations in small groups, each station featuring a different pro-section—a dissection of a cadaver or a cadaver component for purposes of instruction. Students are not just looking at line art memorized on a page when they take anatomy at U Biology. Instead, through the station rotations they hold the human body and its parts, they touch and explore it.

Groot remembers sitting in class and fantasizing about being Nielsen. “I want to do what he’s doing,” he thought. Little did he know that even after leaving for six years of graduate work, culminating in both a Master’s and a PhD, it was Nielsen to whom Groot routinely returned for mentorship. “At every level of my education,” he says, “Mark invoked excitement in human anatomy, changed my life and changed my life direction. I never honestly believed that I would do it [take over from Mark],” he says, shaking his head.

And yet here he is.

As of July 1, Groot, father of two, is the new anatomy professor at the School where hundreds of pre-professional undergraduates will re-live his own experience years ago when he sat in class and moved from station to station, scalpel in hand, gloved and glowing about the sheer joy of explaining to others the ultimate machine: the human body.

Perhaps it’s because his bachelor’s is in pedagogy, but it did not escape Groot that his enduring mentor “was not up there [just] to teach anatomy but to teach his students how to learn. He seamlessly goes into being a mentor from being a teacher or professor.” He sees Mark as the ultimate “growth giant,” a teacher first regardless of the subject or content.

The serendipity of his path—from Alta High School in Sandy where Groots lived in a family of teachers and school counselors to his bachelor’s at the U, and from his gap years in Asia and his virtual stumbling into Nielsen’s lab—led to a master’s in Exercise & Physiology which eventually morphed into PhD work. This aspiration pushed him into research and publishing that was “intense” even “brutal” compared to if he had taken a less condensed track.

Following completion of his doctorate in 2015, Groot threaded his way through half a dozen adjunct appointments before being asked to teach at the U in Health Kinesiology and Recreation (now Health and Kinesiology).

After his career there but before being tapped as the new anatomy teacher at U Biology he was Assistant Professor (Lecturer) in Health and Kinesiology where he directed the Human Performance Lab for six years. He taught all the undergraduate students in those labs–the kinesiology course alone numbered 140 students per section. On top of the teaching load, more serious research awaited Groot like one of his gnarly opponents in Wado Ryu karate, in which Groot has become a fourth-degree black belt (of course) as well as a Sensei … another term in the sport for “master teacher.”

Needless to say, Groot likes a challenge and to keep busy, and his refrain is always this: I love to teach. Among other innovations, he hopes to increase funding for TAs in the anatomy lab while also offering a new course next fall: Applied Musculoskeletal Anatomy in which joints and the study of bio-mechanics will help future physical therapists and doctors assess human movement, including errors, and to correct them without surgery.

Mark Nielsen continues to be a north star to his heir apparent as Groot picks up the reins of a nationally-recognized program and attempts to put his own thumbprint on it. As an athlete himself, Groot believes that everyone should know more about their bodies, and he has that coiled athletic spring in him, emblematic of that singular creature who always knows where every part of his body is at any given moment. It’s a characteristic that leads to the kind of “quiet intensity” he identifies in his mentor, and clearly, here at the end of his first semester in the anatomy lab, it is already working its magic to inspire others.

The model that Nielsen developed of empowering undergraduates as teaching assistants and mentors to scale up the volume of undergraduate anatomy students, is one that Groot hopes to maintain, and even expand if needed. Considering that the SBS has seen a thirty percent increase in student enrollment this year, growth is likely, and the funding will hopefully follow.

TAs in the Nielsen model typically have taught specific content at least three times by semester’s end. “You can’t just say ‘go teach,’” he explains, referring to the training of TAs who are all paid. “That what’s necessary to create skilled young teachers. And the students love it! There’s a feeling of camaraderie [among undergraduates]. They feel like they are a part of something.”

You can support the anatomy program at the School of Biological Sciences through two different funds: The Mark T. Nielsen Endowed Scholarship for Anatomy Students and the John Legler Endowed Lecturer.