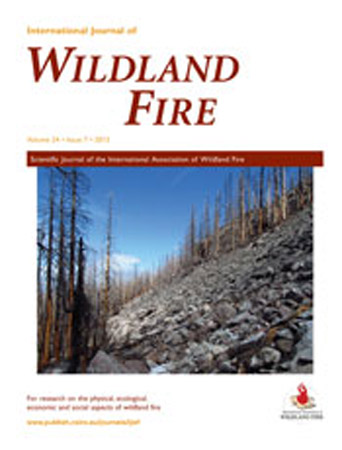 "Too hot to trot? Evaluating the effects of wildfire on patterns of occupancy and abundance for a climate-sensitive habitat specialist"

Wildfires have increased in frequency and severity across western North America, but little is known how these changes will affect mammals, particularly species that are sensitive to other aspects of climate change. Pikas are small mammals that are closelyrelated to rabbits and typically live in alpine rockslides and boulder fields. Although much has been done to understand how pikas respond to changes in temperature and snowpack, little is known about how wildfire affects them. In this work, Johanna Varner, then a graduate student, took advantage of a natural “experiment” in how pikas respond to fire when her instrumented study sites on Mt. Hood burned. With a team of undergraduate co-authors, Varner monitored pika recovery at 24 sites ranging from unburned to totally scorched. Surprisingly, temperatures in the rockslides remained cool during the fire (less than 75°F). In addition, pikas quickly recolonized burned habitat, occupying every site within 2 years. However, their abundance was linked to vegetation–the populations did not recover until vegetation biomass surpassed a threshold, which could be a tractable conservation target for pika management. The work also suggests that pikas may be surprisingly resilient to fire, at least in parts of their range where climatic conditions are otherwise favorable

Wildfires are increasing in frequency and severity as a result of climate change in many ecosystems; however, effects of altered disturbance regimes on wildlife remain poorly quantified. Here, we leverage an unexpected opportunity to investigate how fire affects the occupancy and abundance of a climate-sensitive habitat specialist, the American pika (Ochotona princeps). We determine the effects of a fire on microclimates within talus and explore habitat factors promoting persistence and abundance in fire-affected habitat. During the fire, temperatures in talus interstices remained below 19°C, suggesting that animals could have survivedin situ. Within 2 years, pikas were widely distributed throughout burned areas and did not appear to be physiologically stressed at severely burned sites. Furthermore, pikadensities were better predicted by topographic variables known to affect this species than by metrics of fire severity. This widespread distribution may reflect quick vegetation recovery and the fact that the fire did not alter the talus microclimates in the following years. Together, these results highlight the value of talus as a thermal refuge for small animals during and after fire. They also underscore the importance of further study in individual species’ responses to typical and altered disturbance regimes.