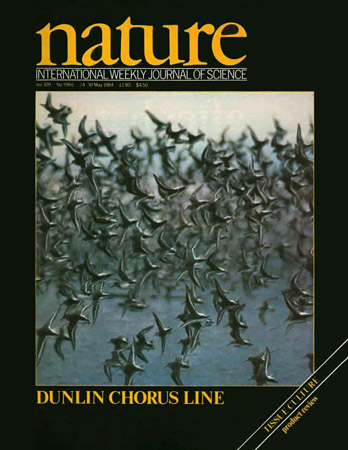 “The chorus-line hypothesis of manoeuvre coordination in avian flocks”

Thousands of birds flying together at high speeds are able to execute abrupt manoeuvres with such precise coordination that some investigators have postulaedthat 'thought transference' or electromagnetic communication must be taking place. Recently, Davis proposed that coordination is achieved by a 'threshold' number of birds executing 'preliminary movements' which signal to the flock that a turn is imminent.Here I show by analysis of film of dunlin (Calidris alpina) flocks that a single bird may initiate a manoeuvre which spreads through the flock in a wave. The propagation of the 'manoeuvre wave' begins relatively slowly but reaches mean speeds three times higher than would be possible if birds were simply reacting to their immediate neighbours. These propagation speeds appear to be achieved in much the same way as they are in a human chorus line: individuals observe the approaching manoeuvre wave and time their own execution to coincide with its arrival.
Full Article