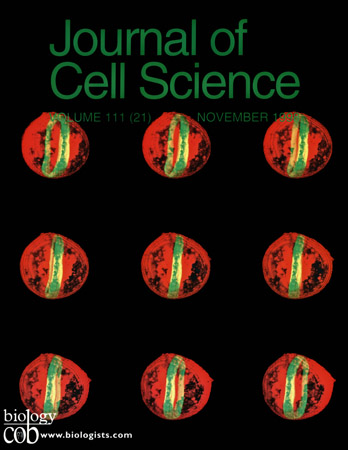 Expression of the microtubule-associated protein Tau and Fyn kinase induces a dramatic reorganization of the microtubule cytoskeleton of mouse 3T3 cells into a cortical ring, here visualized by laser scanning confocal immunofluorescence microscopy an 3D reconstruction of a single cell, rotated in 5 degree increments. Microtubules are stained in green, Fyn kinase is stained in red.Pairs of images in this montage can be viewed in stereo.

Tau and other microtubule-associated proteins promote the assembly and stabilization of neuronal microtubules. While each microtubule-associated protein has distinct properties, their in vivo roles remain largely unknown. Tau is important in neurite outgrowth and axonal development. Recently, we showed that the amino-terminal region of tau, which is not involved in microtubule interactions, is important in NGF induced neurite outgrowth in PC12 cells. Here we report that a proline rich sequence in the amino terminus of tau interacts with the SH3 domains of fyn and src non-receptor tyrosine kinases. Tau and fyn were co-immunoprecipitated from human neuroblastoma cells and co-localization of tau and fyn was visualized in co-transfected NIH3T3 cells. Co-transfection of tau and fyn also resulted in an alteration in NIH3T3 cell morphology, consistent with an in vivo interaction. Fyn-dependent tyrosine phosphorylation of tau occurred in transfected cells and (cont.)