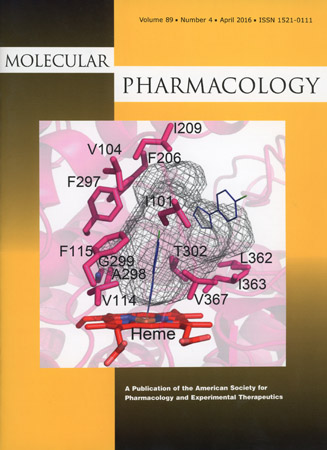 Crystal structures of CYP2B35 and CYP2B37 from the desert woodrat were solved in complex with 4-(4-chlorophenyl)imidazole (4-CPI). The closed conformation of CYP2B35 contained two molecules of 4-CPI within the active site, whereas the CYP2B37 structure demonstrated an open conformation with three 4-CPI molecules, one within the active site and the other two in the substrate access channel. To probe structure-function relationships of CYP2B35, CYP2B37, and the related CYP2B36, we tested theO-dealkylation of three series of related substrates—namely, 7-alkoxycoumarins, 7-alkoxy-4-(trifluoromethyl)coumarins, and 7-alkoxy-4-methylcoumarins—with a C1-C7 side chain. CYP2B35 showed the highest catalytic efficiency (kcat/KM) with 7-heptoxycoumarin as a substrate, followed by 7-hexoxycoumarin. In contrast, CYP2B37 showed the highest catalytic efficiency with 7-ethoxy-4-(trifluoromethyl)coumarin (7-EFC), followed by 7-methoxy-4-(trifluoromethyl)coumarin (7-MFC). CYP2B35 had no dealkylation activity with 7-MFC or 7-EFC. Furthermore, the new CYP2B–4-CPI–bound structures were used as templates for docking the 7-substituted coumarin derivatives, which revealed orientations consistent with the functional studies. In addition, the observation of multiple –Cl and –NH-πinteractions of 4-CPI with the aromatic side chains in the CYP2B35 and CYP2B37 structures provides insight into the influence of such functional groups on CYP2B ligand binding affinity and specificity. To conclude, structural, computational, and functional analysis revealed striking differences between the active sites of CYP2B35 and CYP2B37 that will aid in the elucidation of new structure-activity relationships