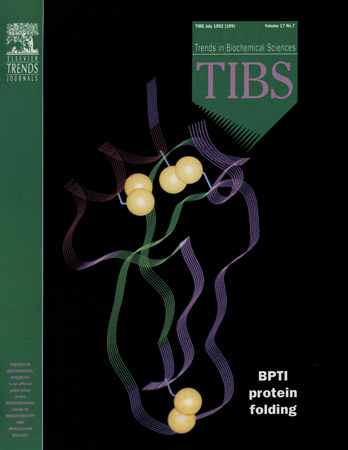 “Native and non-native intermediates in the BPTI folding pathway”

This paper is a review of the folding pathway of bovine pancreatic trypsin inhibitor (BPTI), a small protein that has been used for many years for experimental and computational studies of the basic physical principles that determine the structural, dynamic and functional properties of proteins. The small size and high stability of BPTI make it particularly amenable to such studies. In addition, the folded structure of the protein is stabilized by covalent disulfide bonds between the sulfur atoms of cysteine amino-acid residues, and the formation of these bonds during folding can be used to monitor the process. One of the most surprising results to emerge from early studies of BPTI folding (in the 1970s) was the observation of intermediates that contain disulfide bonds not found in the final folded protein. Later work, in the early 1990s, indicated that the non-native intermediates were less prominent than originally thought, leading to a great deal of controversy about the significance of these intermediates. The goal of this review was to summarize the information available at the time and reconcile the conflicting interpretations. The paper concludes that the non-native intermediates are kinetically important for folding; that is they help provide an accessible pathway to the folded state, even though they contain interactions that aren’t present in the folded state.

Recent studies of the disulfide-bonded intermediates in the refolding of bovine pancreatic trypsin inhibitor (BPTI) indicate that the most stable intermediates can take on much or all of the structure of the fully folded protein. Native-like structure in the intermediates probably causes steric inhibition of direct sequential formation of the three disulfides found in the native protein, thus accounting for the role of intramolecular rearrangements in the folding mechanism of this small protein.