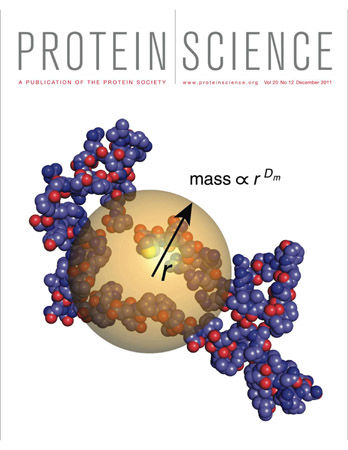 For many decades, it was believed that, in order to function, most proteins had to fold into well-defined three-dimensional structures. Since the 1990s, however, it has become increasingly clear that many proteins have functional states that are highly disordered. Rather than having a single, compact structure, these proteins undergo constant fluctuations among a vast number of conformations, most of which are more highly expanded than folded proteins. These proteins are described as being intrinsically disordered. Because they represent ensembles of rapidly interconverting conformations, intrinsically disordered proteins are generally more challenging to characterize than are folded proteins. One of the important methods used to characterize disordered proteins is small-angle X-ray scattering (SAXS). This method provides information about the distribution of interatomic distances within the molecule. [new graph] The paper highlighted on this journal cover used both SAXS and computational simulations to study an intrinsically disordered protein that functions in the regulation of bacteriophage λ. a virus that infects bacteria. A key element of this study was the direct comparison between the observed SAXS data and the predictions of the computational model. The paper also adopted a mathematical concept, the fractal dimension,to describe the overall compaction of the disordered polypeptide chains. As illustrated in the cover illustration, this property, designated Dm, describes a scaling relationship between the radius of a sphere and the mass of material enclosed by the sphere. The fractal dimension can be estimated from SAXS measurements and calculated from an ensemble of simulated conformations, thus providing a direct point of comparison between the experimental and computational results.

Small-angle X-ray scattering (SAXS) was used to characterize the bacteriophage λ N protein, a 107 residue intrinsically disordered protein (IDP) that functions as a transcriptional antitermination factor. The SAXS data were used to estimate both the average radius of gyration and the fractal dimension, a measure of the protein's internal scaling properties, under a variety of solution conditions. In the absence of denaturants, the radius of gyration was 38 ± 3.5 Å and the fractal dimension was 1.76 ± 0.05, slightly larger than the value predicted for a well-solvated polymer with excluded volume (1.7). Neither the radius of gyration nor the fractal dimension changed significantly on the addition of urea, further indicating that the protein is extensively unfolded and well solvated in the absence of denaturant. The addition of NaCl or D2O was found to promote aggregation, but did not appear to affect the properties of the monomeric form. The experimental SAXS profiles were also compared with those predicted by a computational model for a random-coil polypeptide, with an adjustable solvation energy term. The experimental data were well fit to the model with the solvation energy close to zero. These results indicate that the λ N protein is among the more expanded members of the broad class of IDPs, most likely because of its high content of charged residues and a large net charge (+15 at neutral pH). The expanded nature of the conformational ensemble may play a role in facilitating the interactions of the protein with other components of the dynamic transcriptional complex.