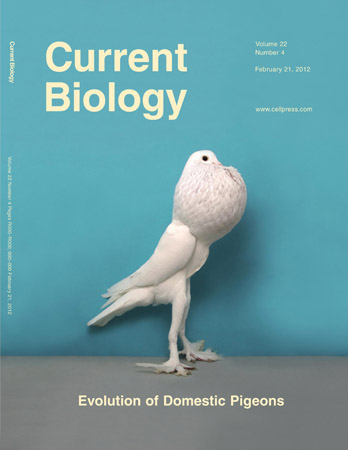 “Divergence, Convergence, and the Ancestry of Feral Populations in the Domestic Rock Pigeon”

Domestic pigeons are spectacularly diverse and exhibit variation in more traits than any other bird species [1]. InThe Origin of Species, Charles Darwin repeatedly calls attention to the striking variation among domestic pigeon breeds—generated by thousands of years of artificial selection on a single species by human breeders—as a model for the process of natural divergence among wild populations and species [2]. Darwin proposed a morphology-based classification of domestic pigeon breeds [3], but the relationships among major groups of breeds and their geographic origins remain poorly understood [4,5]. We used a large, geographically diverse sample of 361 individuals from 70 domestic pigeon breeds and two free-living populations to determine genetic relationships within this species. We found unexpected relationships among phenotypically divergent breeds as well as convergent evolution of derived traits among several breed groups. Our findings also illuminate the geographic origins of breed groups in India and the Middle East and suggest that racing breeds have made substantial contributions to feral pigeon population