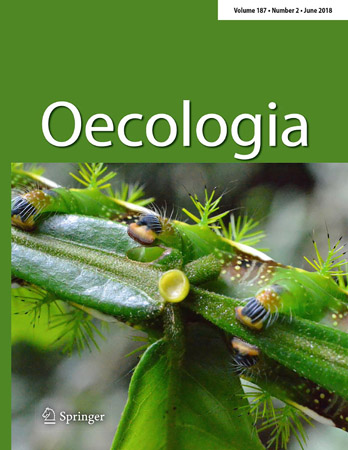 "Consequences of Interspecific Variation in Defenses and Herbivore Host Choice for the Ecology and Evolution of Inga, a Speciose Rainforest Tree"

Inga (Fabaceae), a speciose neotropical genus of trees, is attacked by a diversity of herbivores includingthisAutomeris(Saturniidae) feeding on the underside of a young leaf. Years of research in South American rainforests by Coley, Kursar and colleagues have provided key insights into how interspecific variation in anti-herbivore defenses may have evolved, how defenses shape host choice by herbivores and how they might maintain local diversity and promote speciation. They show that, despite common assumptions, closely related Ingaare not more similar in their anti-herbivore defenses, but exhibit remarkable evolutionary lability. Plants with a different defensive profile will escape attack by the specialized herbivores that are feeding on neighbors or close relatives. Defensive chemicals are the most effective defense and can comprise 50% of the weight of each leaf. The interspecific diversity in chemicals arises from novel combinations of common compounds due to gene regulation rather than novel compounds per se. While related herbivores feed on hosts with similar defenses, there is a lack of congruence between herbivore and host phylogeny, suggesting that herbivores are not co-evolving with their hosts. Instead, the herbivores are choosing hosts based on traits for which they already have adaptations. Moreover, the antagonistic interactions between plants and their herbivores appears to be the primary mechanism keeping any plant species from becoming dominant, and thus maintaining high local diversity. Taken together this indicates that herbivory shapes the evolution of defense profiles and enforces the high local plant diversity typical of tropical forests

We summarize work on a speciose Neotropical tree genus,Inga(Fabaceae), examining how interspecific variation in anti-herbivore defenses may have evolved, how defenses shape host choice by (cont.) herbivores and how they might regulate community composition and influence species radiations. Defenses of expanding leaves include secondary metabolites, extrafloral nectaries, rapid leaf expansion, trichomes, and synchrony and timing of leaf production. These six classes of defenses are orthogonal, supporting independent evolutionary trajectories. Moreover, only trichomes show a phylogenetic signature, suggesting evolutionary lability in nearly all defenses. The interspecific diversity in secondary metabolite profiles does not arise from the evolution of novel compounds, but from novel combinations of common compounds, presumably due to changes in gene regulation. Herbivore host choice is determined by plant defensive traits, not host phylogeny. Neighboring plants escape each other’s pests if their defenses differ enough, thereby enforcing the high local diversity typical of tropical forests. Related herbivores feed on hosts with similar defenses, implying that there are phylogenetic constraints placed on the herbivore traits that are associated with host use. Divergence in defensive traits amongIngaappears to be driven by herbivore pressure. However, the lack of congruence between herbivore and host phylogeny suggests that herbivores are tracking defenses, choosing hosts based on traits for which they already have adaptations. There is, therefore, an asymmetry in the host–herbivore evolutionary arms race.