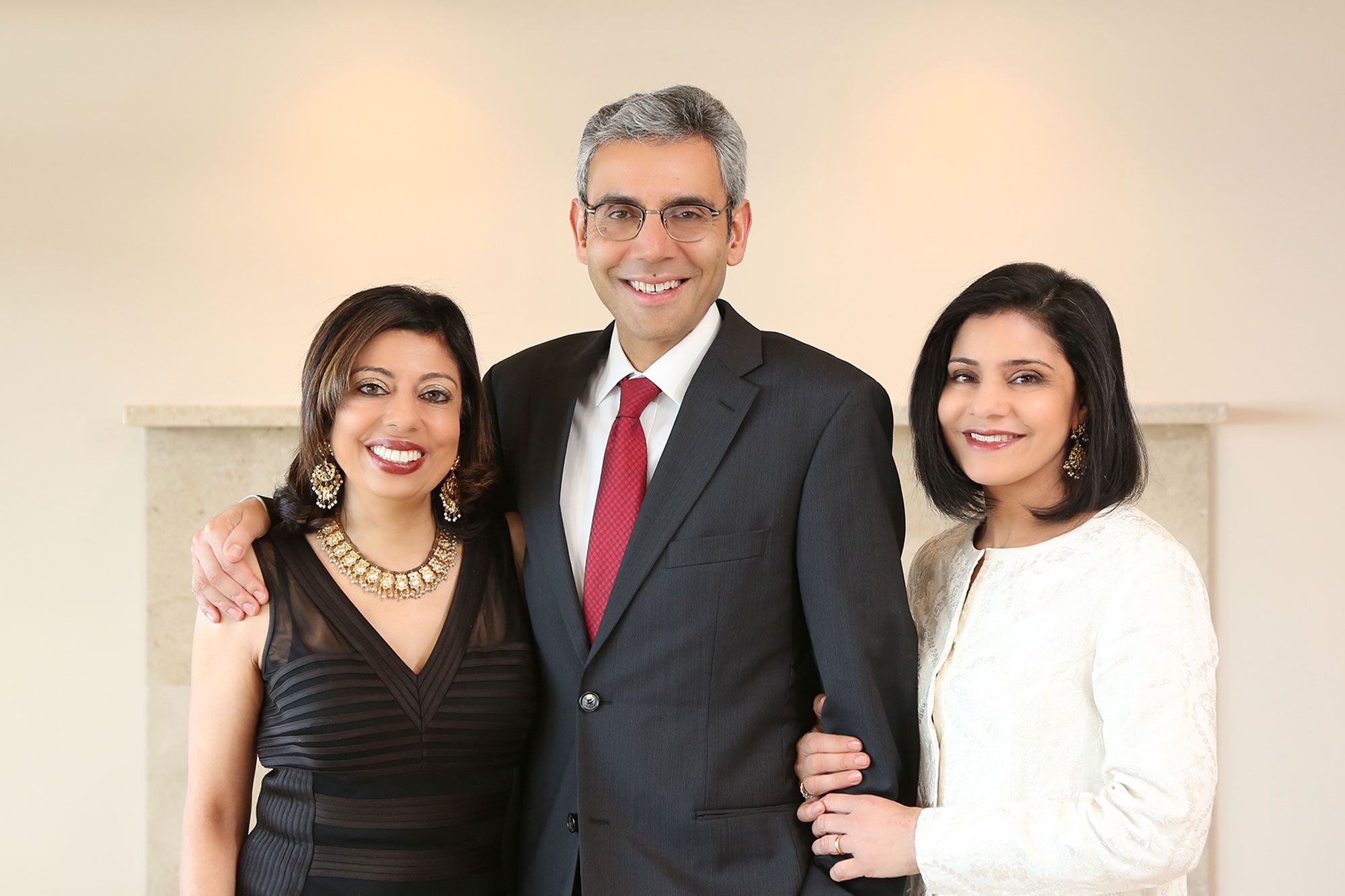 Last December, when the three Gandhi children, Rajesh BS’86, Monica BS’91 and Leena BS’92 returned home to Salt Lake City—two from one coast, and one from the other—they celebrated their parents fifty-fifth wedding anniversary. As alumni, all three, from the School of Biological Sciences, they must have had a lot to reflect on.

Their father, Om, now aged 84, had brought his young family to the U in 1967 during the “summer of love” from their native India when Rajesh “Tim,” the only child at the time, was three years old. A Professor of Electrical Engineering at the U for over 50 years (and former department chair) Om has since retired. Says Rajesh, “We essentially grew up in the Merrill Engineering Building.” He and his sisters remember department picnics and other college events. “We were especially impressed as children with all of the colored chalk they had in the classrooms,” remembers Rajesh. Both Om and the Gandhi children’s mother (Santosh) had to leave home at a young age to pursue further education. After Om earned his PhD at the University of Michigan in the late 50s, he returned to the subcontinent where he taught physics for a time in a small town in India before accepting an opportunity to return to the U.S. He chose the U.

Once the children were older, Mrs. Gandhi returned to school herself, and even took classes from her husband. Far from showing her favoritism, he insisted on only answering her questions during office hours! She eventually finished her degree in computer programming before taking a position at the Salt Lake branch of 3M.

It was an educated family, for sure, and all in the sciences. It was also a family inextricably tied to the University of Utah. All three of the Gandhi children attended the U because it was local, “a function of my parents’ having to leave home early [in their studies] in post-partition India,” says Monica who attended Harvard for her MD and who is currently Professor of Medicine and Associate Chief of the Division of HIV, Infectious Disease, and Global Medicine at UCSF. She also serves as Medical Director of the Ward 86 HIV Clinic at San Francisco General Hospital, one of the oldest HIV clinics in the country. All three siblings remember the excitement of coming to the U after going to public schools in the 1970s/80s, recalling how it broadened their horizons from the more limited experiences they had growing up.

“We were all pretty much wedded to the U. Part of our ethos growing up” in Utah, continues Monica. Attending the U was liberating, they say, mind-opening with a bit of counter-culture at play after going through the public school system in Salt Lake. And certainly it was formative.

“I was moved to enter HIV care,” says Monica, “after growing up in a place where I saw friends coming out as gay in high school struggle with stigma. I also became interested in infectious diseases, which differentially affect the poor, after going to India several times as a child to visit grandparents and witnessing the stark contrast between rich and poor. This set me on the path to medical school.

” Beginning her sophomore year Monica worked on chemotaxis in E.coli with her undergraduate advisor Dr. John (“Sandy”) Parkinson in his lab. She will be returning to Utah as this year’s convocation speaker in May. She describes the Bay Area where she currently lives as a place “that couldn’t be more different than Utah.” Although San Francisco is generally a place where gay and transgender individuals have sought refuge from more conservative places throughout the U.S., “stigma towards people living with HIV still exists and must constantly be combatted,” she says.

Before Monica enrolled in the U, Rajesh, five years older, worked in Dr. Baldomero “Toto” Olivera’s lab, the celebrated faculty researcher whose subject model is poisonous cone snails. “Toto was an incredible mentor to me and to countless others,” says Rajesh. “He taught me the transformative power of science and set me on the road to a career in biology and medicine. I would not be where I am without his encouragement and influence.”

Rajesh’s U experience was as much about philosophy and history as biology. Both he and Leena remember fondly the five-term Intellectual Traditions of the West colloquia with professors like the beloved theologian and classicist Dr. Sterling McMurrin. “At the U, I experienced a whole new world from my time in public schools,” says Rajesh. “It was a place packed with people of diverse experiences, interests and perspectives. It was a vibrant and exciting place to be.”

Around the time Rajesh entered medical school, also at Harvard, he recalls with Monica, the state of affairs of that singular time in American medical history. “HIV was just ramping up. It was a devastating disease and one that was being defined in front of our eyes.” Between 1988–90, the medical sector was furiously attempting to figure out how the disease manifested itself. Treatments were very poor. He especially admires Kristen Ries, MD, MCAP who for a time was head of the clinic at the U serving HIV/AIDS patients. The difference, he says, between the attitude toward the sick in small towns compared to, again, a place like San Francisco at this time was “very moving to me,” he says. Currently, he practices medicine in Boston where he is a specialist in infectious disease and Medical Director of the HIV Clinic at Massachusetts General Hospital and Professor of Medicine at Harvard Medical School. He is also actively involved in HIV clinical research, working on discovering a cure for HIV—the disease that defined his generation.

While all three Gandhis ended up as medical doctors, Leena, who has focused on oncology for the past 10-plus years, currently leads early drug development at Lilly Pharma. Leena earned her PhD at the University of California Berkeley in DNA replication studies before attending New York University for medical school, followed by her residency at Mass General and a fellowship at Harvard Medical School, both in Boston. She characterizes her experience at the U as providing “a genuine ‘college experience’. [The School of Biological Sciences] …was all about scientific inquiry,” she says. “I learned something every day from [then] junior faculty like Dr. Mary Bekerhle [now head of the Huntsman Cancer Institute].” Leena also worked in Ted and Tucker Gurney’s lab in cell biology.

“The spirit of scientific inquiry was everywhere,” she continues, “and it really motivated me to go on for a PhD in the science of medicine and the early development of drugs… At the U, I learned that science drives how we interact at the macro level. It was very grounding.” With the benefits of the novel field of immune-oncology, Leena still has patients who have been free of cancer for more than ten years. But, of course, there is still work to be done. “At Lilly I’m able to do work at a much larger scale and with a much broader population.”

The Gandhi Effect found in Rajesh, Monica and Leena Gandhi— from “sea to shining sea”—is indeed a rarity, what one might call “A Triple Threat” that the School is proud to embrace.

This story originally appeared in OUR DNA, SBS’s magazine, Spring 2019.