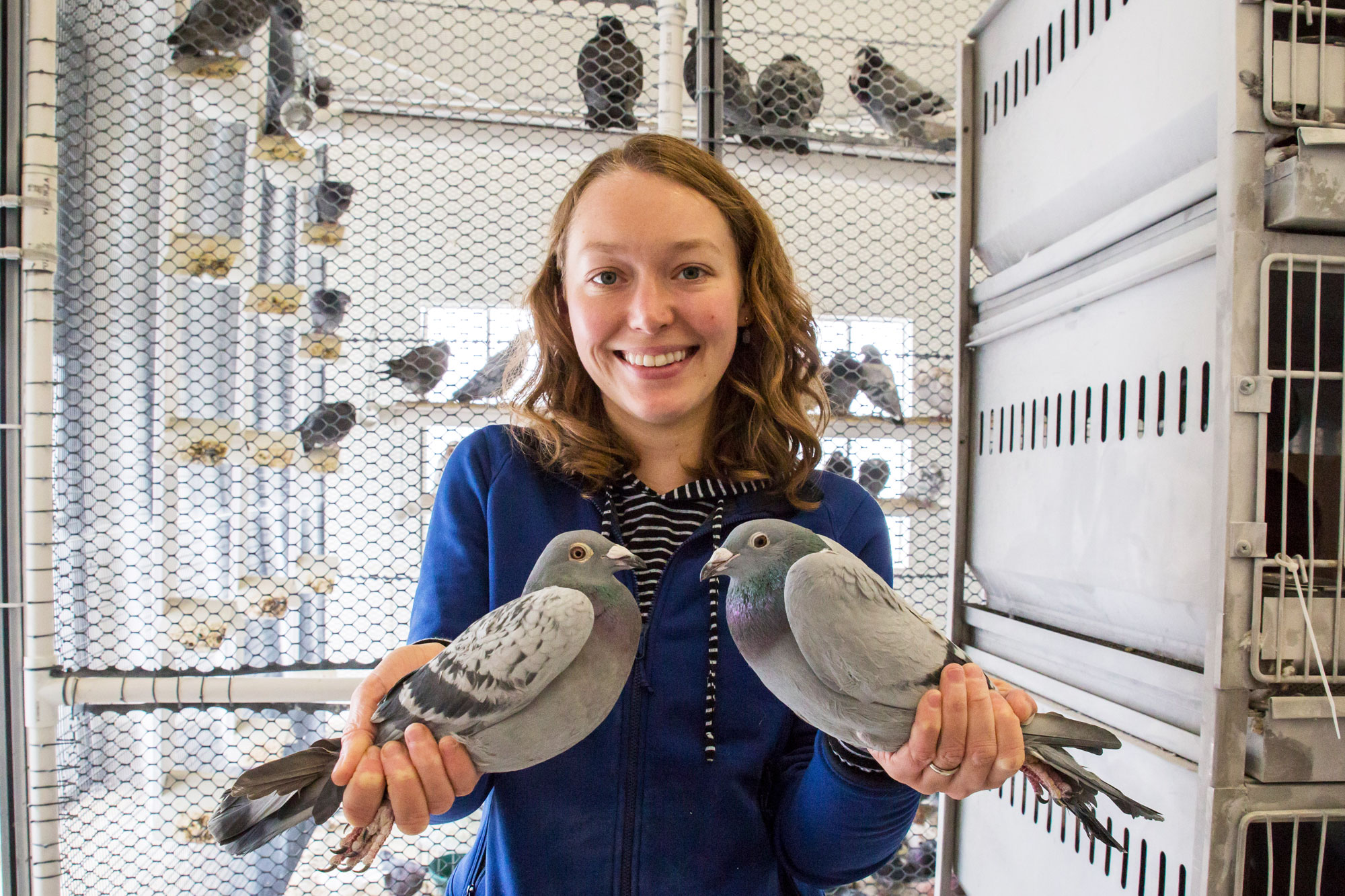 Anna Vickrey who graduated from the School of Biological Sciences with a PhD in 2020 has always been fascinated with domestication, both the process and the “products” which include the plants and animals important to our lives and history as humans. “I became really interested in the morphological diversity present both in domestic breeds and natural species by going to a lot of dog shows,” she says.

The Salt Lake City native also had chickens and pigeons, growing up, and spent time around wild bird species (“My mom ‘rehabbed’ wild birds out of our house,” she reports). As an undergrad at the University of Utah, she became curious about how diversity is generated at the genetic level. “Naively, I was wondering if differences in morphology are generated by ‘coding’ or ‘regulatory’ changes to genes. In reality,” she admits, “it’s more complicated than that!).” Fortunately for her, this was one of the questions that Professor Mike Shapiro was asking in his pigeon lab which she was able to join and where she continued working through her graduation last spring.

Vickrey keeps pigeons as pets, mostly American Show Racer and Archangel breeds, so the model subject of her research for the past several years is one she’d had a longstanding interest in. While in the Shapiro lab she studied wing color patterns in domestic pigeons. “Even though we know that color patterns are really important for animals in the wild (for things like camouflage and mate choice), there’s still a lot that’s not known about how patterns are generated at the genetic and molecular level,” she says. “I also work on head crests, a type of ornamental feather structure–sort of a fancy feather-do–that are present in lots of pigeon breeds and wild bird species.”

For each of these projects, she and her team learned some surprising things about the genes that cause these traits. For example, pigeons with a wing color pattern called “barless” also can have vision defects that are called “foggy vision” by pigeon breeders. “The gene that we found is associated with the barless color pattern is known to cause hereditary blindness in humans when the gene is mutated.” And while the researchers didn’t expect to discover this connection, foggy vision in barless pigeons is caused by eye defects that are similar to humans with this type of hereditary blindness.

Staggeringly, there are over 300 breeds of domestic rock pigeon. Similar to dogs, these breeds can look extremely different from one another (think of the difference between a Chihuahua and a Great Dane) even though they’re all the same species. Also, the pigeons all over a typical city like Salt Lake are “ferals,” she explains, meaning they’ve descended from the same domestic species.

The School of Biological Sciences houses research on a huge diversity of topics. “As an undergrad and then a grad student I’ve always felt very lucky to have exposure to such diversity–everything from crystallography and protein biochemistry to rainforest ecology!” she says. Now with her PhD, it’s clear to Vickrey that it’s important to be a lifelong learner. Even while currently finishing up the projects in the Shapiro lab, “we’re starting to get some really cool results looking at the bright red skin around the eyes.”

In turns out that the color may be another trait that was hybridized into domestic pigeons from the African speckled pigeon. She and her colleagues will also be kept busy during the next few months looking for modifier genes that control head crest size.

And what are her plans long-term? “I want to stay on a career path that allows me to continue to communicate science while keeping me connected to science. I’m really interested in genetic counseling but I’m also looking at a science policy fellowship.”

Clearly, Vickrey whose heroes include Marie Curie, the Polish and naturalized-French physicist and chemist who conducted pioneering research on radioactivity, is characterized by a diversity of inquiry she found so available at SBS. Indicative of that are other heroes of hers that she ticks off:  Latino artist Frida Kahlo, the author Antoine de Saint-Exupéry (most famous for his iconic The Little Prince), and the late marine biologist Rachel Carson whose signature Silent Spring spring-boarded conservation and nature writing into the national conversation. All of these people, like Vickrey, possess determination, creativity, and passion.

Armed with her doctorate, Anna Vickrey will eventually land at her next formal adventure animated by scientific research and intense learning. In the meantime, her love of domesticated animals continues, an interest that threads through her inquisitive life before and during her time at the U, and now post graduation. Along with reading fiction and cooking, she will always enjoy trail running with her dogs. “I [also] go to a lot of ‘animal competitions'” she says, looking for the right term to describe her enduring interest outside her research, “like quarter horse races and sheepdog trials.”